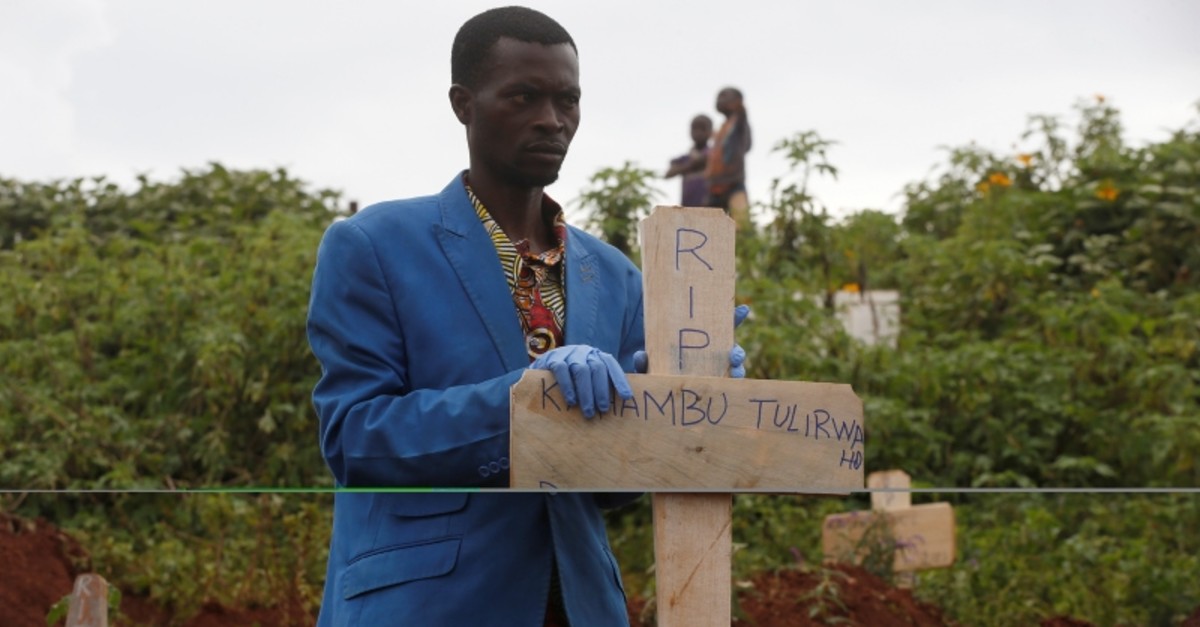 A Congolese man holds a cross during the burial service of Congolese woman Kahambu Tulirwaho who died of Ebola, at a cemetery in Butembo, in the Democratic Republic of Congo, March 28, 2019. (Reuters Photo)
by Compiled from Wire Services
Jun 04, 2019 4:13 pm

The number of cases of Ebola in eastern Congo has passed 2,000, government figures showed late on Monday, as the rate of new cases tripled and containment efforts faltered in the remote, unstable region.

Local mistrust of health workers and attacks on Ebola clinics by armed militias have contributed to an acceleration in what is now the second-worst outbreak of the virus on record.

The outbreak reached 1,000 cases in March, more than seven months after it was first detected in August last year. It took less than three more months to reach 2,000, according to Democratic Republic of Congo's health ministry and aid agency figures. More than 1,300 have died.

Responders face twin obstacles: resistance from communities who believe that Ebola is a conspiracy made up by aid agencies and the government, and from armed groups seeking to stoke instability for their own gain.

"The current response to tackle Ebola isn't working," said Corinne N'Daw, Oxfam's country director in Congo. "No matter how effective treatment is, if people don't trust or understand it, they will not use it."

A mob killed an Ebola health worker and looted a clinic in the village of Vusahiro earlier this month. Between January and early May, there were 42 attacks on health facilities, with 85 workers either injured or killed, according to WHO figures from May 3.

The outbreak is the 10th in the Democratic Republic of Congo since the disease was identified in 1976.

It is the worst on record after an epidemic that struck three African countries between 2014-2016, leaving more than 11,300 people dead.