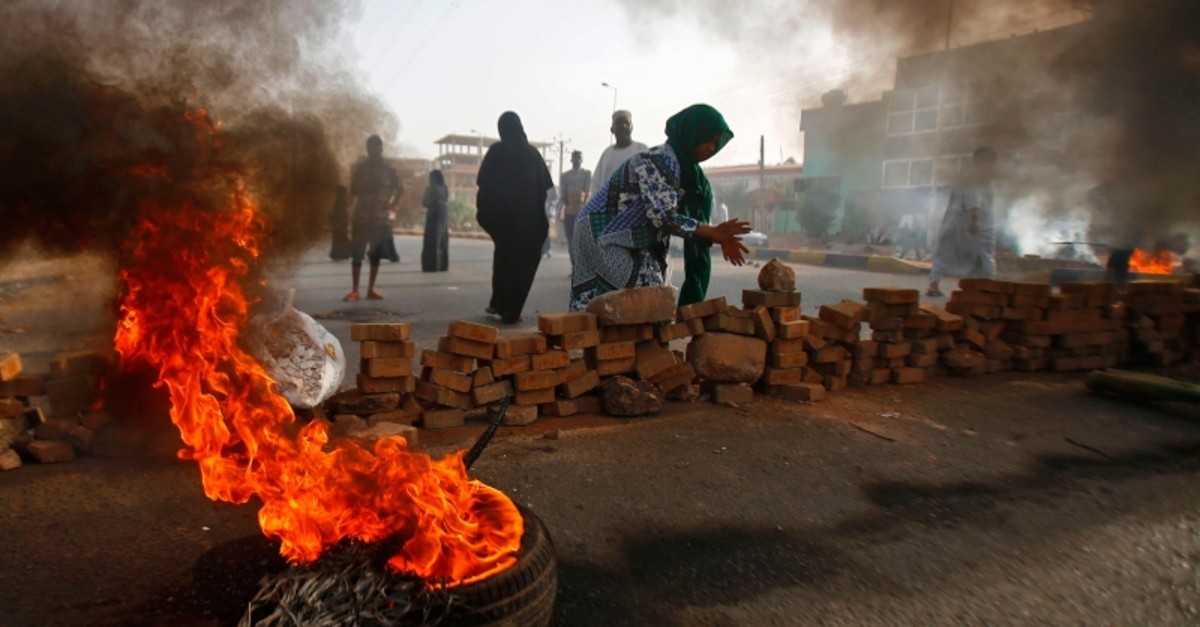 More than 40 bodies of people slain by Sudanese security forces were pulled from the Nile River in the capital of Khartoum, organizers of pro-democracy demonstrations said Wednesday, and new clashes brought the death toll in three days of the ruling military's crackdown to 108.

The Sudan Doctors Committee, one of the protest groups, reported eight more deaths by late Wednesday and said at least 509 people had been wounded. Three children from one family were among the victims, said the committee.

Word about the retrieval of the bodies came as Sudan's ruling general called for a resumption of negotiations with the protest leaders, which they promptly rejected. They said the generals cannot be serious about talks while troops keep killing protesters.

A spokesman for the protesters said that instead they would continue their demonstrations and strikes seeking to pressure the military into handing over power to a civilian authority.

The reported discovery of the bodies in the Nile suggested that Monday's violent dispersal of the protest movement's main sit-in camp, outside military headquarters, was even bloodier than initially believed. The attack on the camp was led by a notorious paramilitary unit called the Rapid Support Forces, along with other troops who waded into the camp, opening fire and beating protesters.

During the mayhem, the Doctors Committee said witnesses reported seeing bodies loaded into military vehicles to be dumped into the river. The camp was not far from the Blue Nile, just upstream from where it joins the White Nile and then flows north through Sudan and Egypt to the Mediterranean.

The committee said in a statement that a day earlier, militiamen of the Rapid Support Forces were seen pulling 40 bodies from the river and taking them away. It said it was not known where they were taken.

One activist, Amal al-Zein, said the number could be even higher. She said activists and private citizens had pulled dozens more bodies from the Nile in areas near the sit-in and took them to a hospital morgue.

"Some bodies have wounds from bullets, others seemed to have beaten and thrown in the Nile," she said.

On Monday, the Doctors Committee put the death toll from the crackdown at 40. Another 10 were reported killed in clashes Tuesday in Khartoum and Omdurman, the capital's twin city across the Nile, and farther south in the White Nile state.

At least 18 more were killed in clashes or died of earlier wounds Wednesday, the Doctors Committee said late in the day. The committee said it feared the final death toll would be much higher.

However, Sudan's health ministry has said "no more than 46" people died in a crackdown on Khartoum protesters, far fewer than the 108 dead reported by doctors.

"Doctor Suleiman Abdul Jabbar, undersecretary for the health ministry, denied in a press statement what some media had reported about the number of dead in the recent events reaching 100 individuals, confirming that the number was no more than 46," state news agency SUNA reported late Wednesday.

Hospitals in Khartoum said they were struggling to cope with the number of wounded.

"The situation is very difficult. Most of the hospitals have taken in more casualties than they have capacity for," a doctor who works at two hospitals in the city told AFP.

"Among the wounded there are still people in a serious condition and I expect the number of deaths to rise."

"In Buri, there were lots of shootings and tear gas," said Hashim al-Sudani, an activist. "They tried to force people into narrow streets" to beat them.

The crackdown has turned a tense but relatively peaceful standoff between the military and the protest movement over the country's future into a bloody confrontation that threatens to escalate.

Months of protests succeeded in forcing the ouster in April of strongman Omar al-Bashir, who had ruled Sudan for 30 years as head of a repressive state backed by the military. When the generals took power after his fall, the protesters stayed in the streets, saying they wanted an end to military rule as well.

For weeks, the military and protest leaders negotiated over the makeup of a transitional council meant to run the country for three years before elections. Protesters demand that civilians dominate the council, but the generals resisted.

After Monday's crackdown, protest leaders suspended negotiations. The head of the military council, Gen. Abdel-Fattah Burhan, then canceled any agreed-upon points from the talks and said the military would form a government to hold elections within seven to nine months.

On Wednesday, however, Burhan abruptly announced that the generals were prepared to resume negotiations with "no restrictions."

"We open our hands to negotiations with all parties ... for the interest of the nation," Burhan said, adding that those responsible for the attack on the sit-in camp would be held accountable.

The reasons for his about-face were not immediately clear. But the offer could cause divisions within the protest movement, where some factions may be open to returning to the table.

The military council's deputy head, Gen. Mohamed Hamdan Dagalo — who also leads the Rapid Support Forces, the force protesters blame for the bulk of killings — said in televised comments that a "fair and independent" investigation had been launched into the violent breakup of the Khartoum sit-in and other clashes.

Dagalo, better known by his nickname Hemedti, promised "fast results" and said anyone who "crossed boundaries" will be punished.

He has denied the involvement of his forces in the killings, saying unknown forces wearing RSF uniforms were responsible for the deaths.

The Rapid Support Forces grew out of the Janjaweed militias used by the government to suppress the Darfur insurgency in the 2000s, a campaign that prompted charges of genocide against its perpetrators. Human rights groups said that under Dagalo in more recent years, RSF militiamen carried out rapes, torture and killings of Darfur civilians.

The Sudanese Professionals Association, which has spearheaded the demonstrations and since Monday has called for the ouster of the military council, said protesters "totally reject" Burhan's offer.

"This call is not serious," association spokesman Mohammed Yousef al-Mustafa told The Associated Press. "Burhan and those under him have killed the Sudanese and are still doing it. Their vehicles patrol the streets, firing at people."

"We will continue in our protests, resistance, strike and total civil disobedience," he said.

But the head of Sudan's leading opposition political party, the Umma Party, seemed to suggest the movement needed to discuss its position. Sadeq al-Mahdi urged all factions in the protest movement to meet urgently to work out "how to bring the transfer of power" to a civilian council.

He did not urge a return to negotiations but criticized some in the movement for "unjustified escalation" — an apparent reference to strikes called by the Sudanese Professionals Association in previous weeks — and said he had expected the military to escalate as well. He said the military council had played a "critical role in the revolution" by ousting al-Bashir and now must admit responsibility for Monday's attack and hold those behind it accountable.

Al-Mahdi headed the last elected government in Sudan, preceding al-Bashir. His Umma Party is one of a number of long-established opposition parties that joined the protest movement, bringing their organized rank-and-file into the streets. Some protesters view them with suspicion, considering them an old guard not ready to bring dramatic change.

"What happened on Monday was a systematic and planned attempt to impose repression on the Sudanese people," he said.

The crackdown on the sit-in was condemned by the U.N. Secretary General Antonio Guterres, Britain and the United States.

"We send our condolences to the victims and families who lost loved ones. We call on Sudan's Transitional Military Council and the Rapid Support Forces to desist from violence and we call for resumed contact with the Forces for Freedom and Change with the aim of a civilian-led transition that leads to timely elections and free expression of the will of the Sudanese people," State Department spokeswoman Morgan Ortagus said in a statement.

Ortagus added that State Department officials were in talks with officials from the region and said the U.S. "remains firmly committed to working with the people of Sudan, along with our international partners, in pursuit of a peaceful solution in Sudan."

Top U.S. envoy David Hale, under secretary of state for political affairs, underlined the importance of a transition to a civilian-led government in a phone call with the Saudi deputy defense minister, Khalid bin Salman, the State Department said.

Saudi Arabia and the United Arab Emirates, key backers of the ruling generals, have called for a resumption of "dialogue between the various parties."

"The UAE hopes that wisdom, reason and constructive dialogue will prevail between all Sudanese parties, in a way that guarantees security and stability," the foreign ministry said in a statement carried by the official WAM news agency.

"The UAE emphasizes the importance of resuming talks among various Sudanese forces to realize the aspirations of the brotherly people of Sudan," it added.

While African and Western governments have been strongly supportive of the protesters, Riyadh and its allies, which are deeply hostile to popular movements in the region, have provided the military council with desperately needed aid.

Last month, the UAE deposited $250 million in Sudan's central bank, part of a promised $3 billion credit line Abu Dhabi and Riyadh have pledged to shore up the plummeting Sudanese pound and finance imports of basic goods.

A push for the U.N. Security Council to condemn the killing of civilians and call on the military and protesters to work together was blocked by China, which was backed by Russia, during a closed-door meeting on Tuesday.

Eight European countries instead issued their own joint statement criticizing "the violent attacks in Sudan by Sudanese security services against civilians."

Mikhail Bogdanov, chief of the Russian foreign ministry's Middle East desk, told Russian news agencies on Thursday that a compromise is needed to settle the crisis in the African nation. He said that Russian diplomats are in touch with all political players in Sudan, including the opposition. Bogdanov visited the Sudanese capital of Khartoum earlier this year.

Russia has largely stayed on the sidelines as Sudanese protesters rallied for months until the military ousted longtime autocrat Omar al-Bashir and took over control.

Amnesty International called on the African Union and the U.N. to "take immediate action to hold the perpetrators of this violence accountable".

The British ambassador to Khartoum, Irfan Siddiq, called for an end to the internet outages that have plagued the country since the crackdown.

"In these critical times it is essential that everyone can communicate, particularly to urge messages of keeping things calm and peaceful," he tweeted.