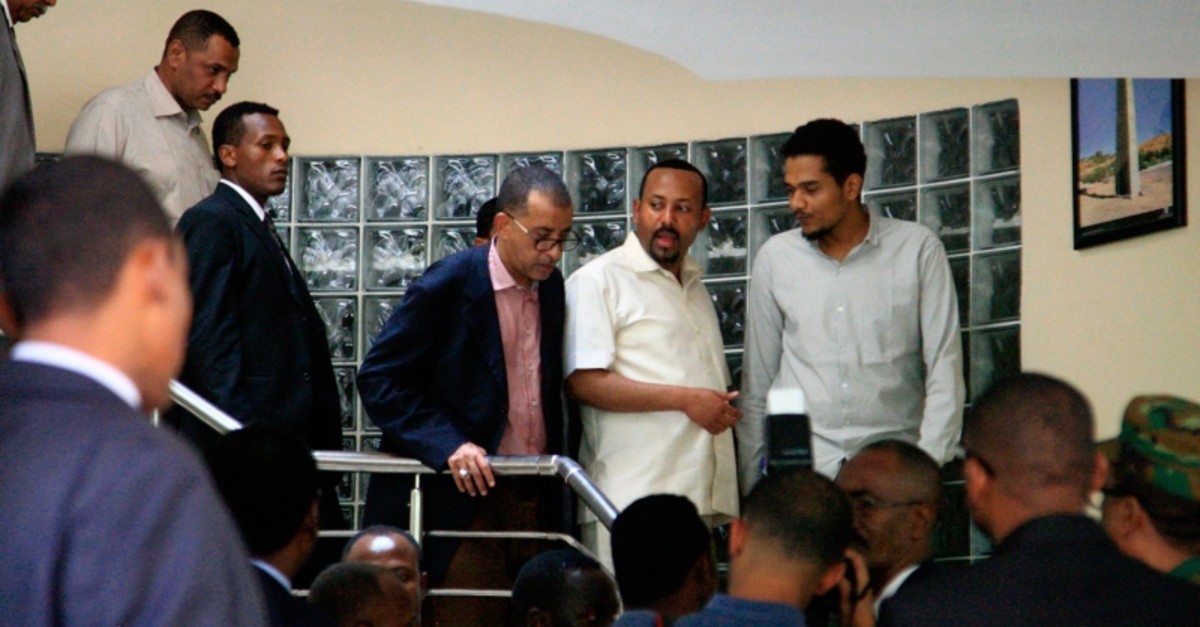 Ethiopia's Prime Minister Abiy Ahmed (2nd-R) meeting a delegation of the Alliance of Freedom and Change in the Ethiopian embassy in Khartoum, Sudan, on June 7, 2019. (AFP Photo)
by Compiled from Wire Services
Jun 08, 2019 12:20 pm

Sudanese security forces have arrested two prominent rebels and an opposition leader, a day after they met the Ethiopian premier during his reconciliation mission to Khartoum, their aides said Saturday.

Prime Minister Abiy Ahmed, who has emerged as a key regional leader, met representatives of both sides on Friday in a bid to revive talks between Sudan's ruling generals and protest leaders after a deadly crackdown left dozens of people dead in the capital this week.

Among the protest movement delegates he met were opposition politician Mohamed Esmat and a leader of the rebel Sudan People's Liberation Movement-North (SPLM-N), Ismail Jalab.

Sudanese security forces later arrested both men without giving any reason, their aides told AFP on Saturday. Esmat was arrested on Friday soon after his meeting with Abiy. Jalab was arrested from his residence early on Saturday.

"A group of armed men came in vehicles at 3:00 am (1:00 GMT) and took away Ismail Jalab... without giving any reason," Jalab aide Rashid Anwar told AFP, adding that SPLM-N spokesman Mubarak Ardol was also detained.

"We don't know where they are being held," he added.

Esmat and Jalab are both leading members of the Alliance for Freedom and Change, which brings together opposition parties and rebel groups with the organizers of the mass protests which have gripped Sudan since December last year.

The arrest of Jalab comes just days after the SPLM-N's deputy leader, Yasir Arman, was seized from his home in Khartoum. The rebel number two had only returned to Khartoum from exile late last month.

The SPLM-N has led uprisings among non-Arab ethnic minorities in Blue Nile and South Kordofan states since 2011, that Sudan's military rulers had vowed to end peacefully after their overthrow of longtime president Omar al-Bashir in April.

The military has resisted the protesters' demands for an immediate handover of power to civilians. On Monday, security forces violently dispersed the main sit-in outside the military headquarters in Khartoum, and similar clashes have erupted in other cities and towns.

Abiy, a young reformist who assumed office a year ago, has been at the center of high-profile diplomatic efforts in the Horn of Africa region, including a surprise restoration of diplomatic ties between Ethiopia and rival Eritrea.

During his visit, Abiy met separately with Sudan's ruling generals and protest leaders in a bid to revive negotiations. He met Friday with Gen. Abdel-Fattah Burhan, the head of the ruling council, as well as protest leaders before leaving Khartoum in the evening.

In a phone interview with Saudi-owned satellite channel al-Arabiya, protest leader Gaafar Hassan declined to discuss the meeting in detail, saying a news conference would be held later, but ruled out any "direct" or "indirect" talks with the military.

"The (military) council has lost its political as well as its ethical legitimacy and we cannot deal with it, but we call for its ouster," he said.

In a statement shared by the military council, the Ethiopian prime minister called on Sudanese to show "courage" and move quickly toward a democratic, inclusive transition. Political parties should not be held hostage to prejudices of the past, he added.

There was no immediate comment from the office of the Ethiopian prime minister and it was not known what demands were made during the talks or what will happen next.

The Sudan Doctors' Central Committee, one of the protest groups, said at least 113 people have been killed and more than 500 wounded since Monday. It says more than 40 bodies have been pulled from the Nile River in Khartoum and taken away by security forces since the violence erupted.

The protesters have blamed much of the violence on the Rapid Support Forces, a paramilitary group that grew out of the notorious Janjaweed militias mobilized by al-Bashir during the Darfur conflict in the early 2000s. The militias were widely accused of crimes against humanity, and al-Bashir — now jailed in Khartoum — was indicted on charges of genocide.

The head of the RSF, Gen. Mohammed Hamdan Dagalo — better known as Hemedti — was "conspicuously absent" in photos shared by the Ethiopian prime minister's office, according to Rashid Abdi, a former project director with the International Crisis Group.

"That is significant," he wrote on Twitter. "Lends credence to reports of push to sideline the RSF commander."

In a statement released late Thursday, protest leaders demanded that the RSF be dissolved and its weapons handed over to the army.

Amnesty International said the RSF should return to their barracks and be barred from any law enforcement activities.

"The senseless killing of protesters must be stopped immediately, and those responsible for the bloodbath, including at command level, must be held fully accountable for their dreadful actions," said Kumi Naidoo, secretary general of the London-based rights group.

After al-Bashir's ouster, the Ethiopian prime minister had congratulated the Sudanese people for their "resilience in leading change" toward a democratic Sudan. He met with Burhan during the general's visit to Addis Ababa last week, when he committed to "non-interference" in the situation but urged political inclusiveness.

Abiy is seen as having good relations with the West, which has cheered his reforms, as well as with powerful Gulf states, including Saudi Arabia, that have influence over Sudan's military.

Awol Allo, a lecturer in law at Keele University in Britain and an Africa analyst, said Abiy stands a "much better chance" than anyone else in bringing the two sides together.

Abiy "brings a lot to the table, from his own experience of leading a complex transition to a massive amount of positive energy, and the weight of Ethiopia's power within the region," the analyst said.

Meanwhile, the U.N. health agency said Friday it is gravely concerned over the targeting of patients, medical staff and facilities during the crackdown.

Security forces are making "incursions into Khartoum hospitals," the World Health Organization said, forcing shutdowns of emergency and health services. It said five patients and medical workers have been wounded. The agency said tent clinics set up to treat wounded protesters have been set ablaze and destroyed, medical equipment has been looted, and health care workers assaulted.

The African Union, based in Ethiopia, suspended Sudan on Thursday and threatened "punitive sanctions" if the military doesn't quickly relinquish power.