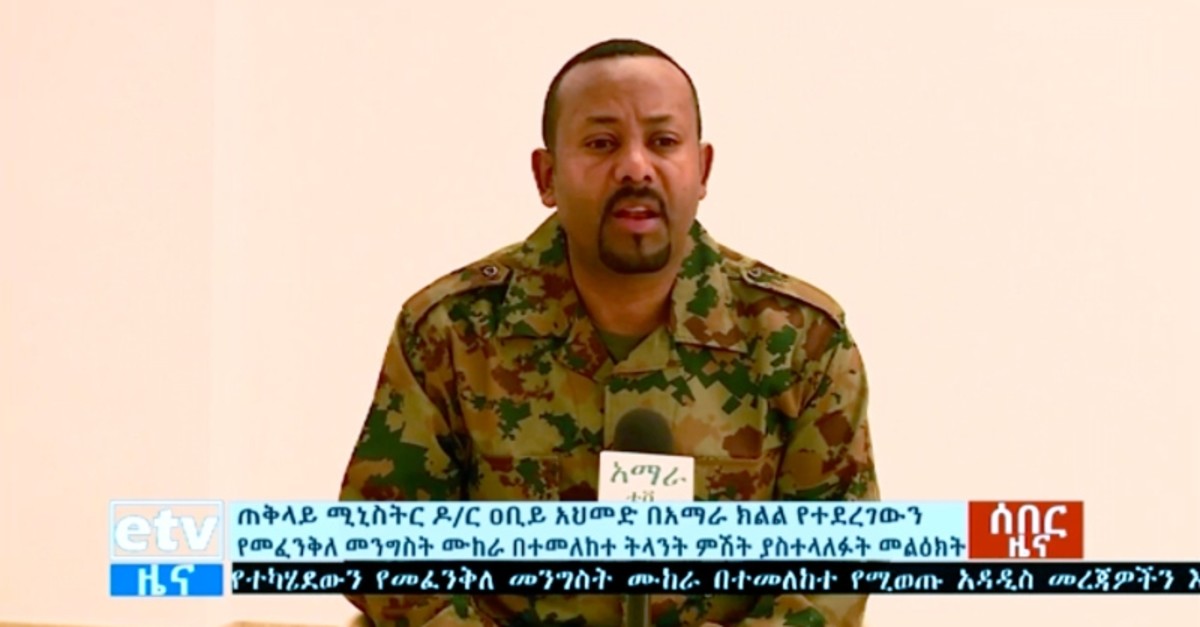 In this image made from video, Ethiopia's Prime Minister Abiy Ahmed announces a failed coup as he addresses the public on television, Sunday, June 23, 2019. (ETV via AP)
by Associated Press Jun 23, 2019 11:15 am

Ethiopia's government foiled a coup attempt in a region outside the capital, Addis Ababa, the country's prime minister said in a televised address late Saturday.

The failed coup in the Amhara region was led by a high-ranking military official and others within the country's military, Prime Minister Abiy Ahmed told the state broadcaster wearing military fatigues.

Some people had been killed and others wounded in the operation, Abiy said in his address without giving details.

In a related development, the head of Ethiopia's military Gen. Seare Mekonnen was killed in his home by his bodyguard, not long after the attack in Amhara.

The U.S. Embassy reported gunfire in the capital Saturday and urged people to be careful. In Bahir Dar, capital of Amhara, residents told The Associated Press they could still hear gunshots late Saturday. Ethiopia's internet appeared to be shut down on Sunday.

The attempted coup in Amhara is the latest challenged to Abiy, who was elected last year as a reform-minded young leader.

Abiy has captured the imagination of many with his political and economic reforms, including the surprise acceptance of a peace agreement with bitter rival Eritrea, the opening of major state-owned sectors to private investment and the release of thousands of prisoners including opposition figures once sentenced to death.

Along the way he has faced some challenges. In June 2018, only months in office, an attempt to hurl a grenade at Abiy caused a deadly explosion at a massive rally in support of the sweeping changes in Ethiopia. Nine police officials were arrested over that incident, state media reported.

In October rebellious Ethiopian soldiers protested over pay, causing a security incident in the capital. Ethiopia's army is one of the largest in Africa. The country is a key regional security ally for the United States and others in the restive Horn of Africa region.

Amhara in Ethiopia's northern highlands, is the homeland of the ethnic group by the same name, and is the birthplace of many of its emperors as well as the national language Amharic. The Amhara are the second-largest ethnic grouping after the Oromo, and both spearheaded two years of anti-government protests which led to the resignation of former Prime Minister Hailemariam Desalegn.

Abiy, an Oromo, took power in April 2018. He has embarked on economic reforms, allowed dissident groups back into the country, sought to crack down on rights abuses and arrested dozens of top military and intelligence officials. However the loosening of the reins has also unleashed a wave of unrest.

The EPRDF itself is a coalition of four parties from Oromia, Amhara, Tigray and the Southern Nations, Nationalities, and Peoples' Region.

Observers say that Abiy's plans to hold an election in 2020 has stirred up resentment in local politics, with other regional parties contesting the hold of those within the EPRDF and a rise in ethno-nationalism.

At the same time, longstanding tensions in a country of more than 80 ethnic groups have burst into the open, often over land and resources in Africa's second most-populous nation.

Over a million people have been displaced by ethnic clashes, which analysts attribute to multiple causes, such as the weakening of the once all-powerful ruling EPRDF and different groups trying to take advantage of opportunities presented by the political transition