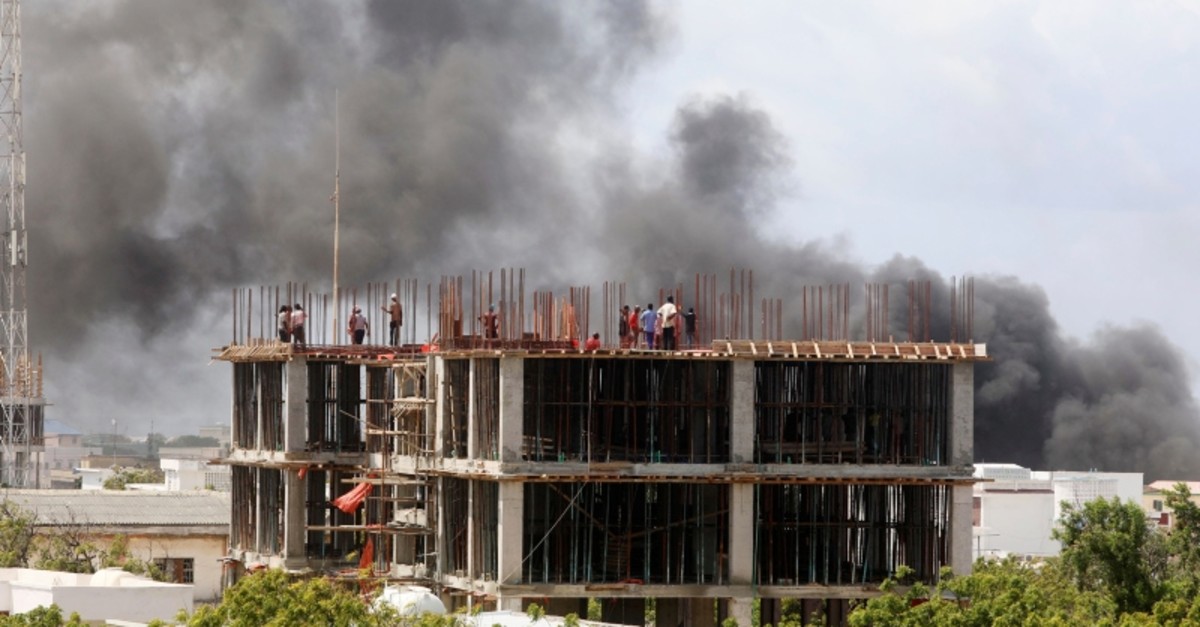 Workers are seen on a construction site as smoke billows from the scene of an explosion in Mogadishu, Somalia July 22, 2019. (Reuters Photo)
by Compiled from Wire Services Jul 22, 2019 3:57 pm

The death toll from a car bombing in Mogadishu on Monday climbed to 17, hospital officials said, with more than two dozen wounded in the explosion claimed by al-Shabaab terrorists.

"The bodies of 17 people killed in the blast were taken to the hospital mortuary while 28 others were admitted for various wounds," said Mohamed Yusuf, the director of Medina Hospital, the main trauma facility in the Somali capital.

A police officer Capt. Mohamed Hussein, said earlier Monday that a car packed with explosives and parked near a busy security checkpoint by the city's airport was detonated by remote control.

The powerful explosion which rocked Mogadishu occurred in the morning when many people were on the road going to work and others were traveling to attend the Hajj pilgrimage in Saudi Arabia's Mecca.

An eyewitness Ahmed Ali Hassan, 31, told Anadolu Agency that the car, hit the security checkpoint on the road, leading to Adan Adde international airport in Mogadishu.

"I was at my shop, close to the checkpoint, I saw a car parking near the checkpoint and then minutes later it exploded. I saw dead people laying on the ground," Hassan said.

"We strongly condemn the terrorist attack perpetrated this morning by a car bomb targeting a hotel in Mogadishu, causing death and injury of numerous people," the Foreign Ministry said in a statement.

"We wish God's mercy upon those who lost their lives, a speedy recovery to the wounded and convey our condolences to the friendly and brotherly government and people of Somalia," it added.

Al-Shabaab regularly launches attacks on government buildings, hotels and restaurants in the volatile nation in the Horn of Africa.