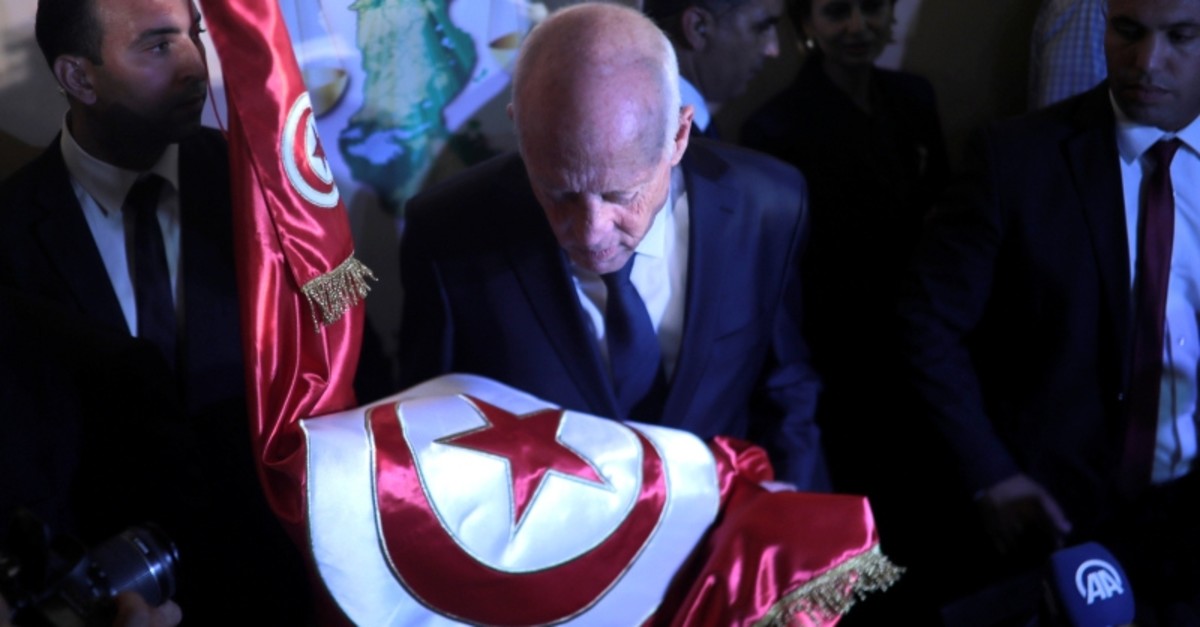 Tunisian independent candidate Kais Saied has secured more than 72% of votes in the presidential elections held on Sunday, according to exit polls.

Saied's supporters exploded with joy, celebrating on the main boulevard of Tunis even though official results from Sunday's runoff vote weren't expected until Tuesday.

Polls carried in Tunisian media by Sigma Conseil and Emhrod Consulting forecast that Saied would come out on top with between 72% and 77% of the vote. Rival Nabil Karoui, who was in jail for most of the campaign, was projected to win between 23% and 27%.

Tunisians went to polling stations on Sunday to elect the country's second elected president since the 2011 uprising.

More than 7 million Tunisians were eligible to cast ballots in Sunday's vote, according to the country's electoral commission.

Saied, 61, is an independent outsider but is supported by the Ennahdha pary, which won last week's parliamentary elections. He promised to hand more power to young people and local governments.

Voters lined up even before polls opened in the capital, Tunis, choosing between two candidates who have never held political office and didn't really campaign.

The only thing Saied and Karoui had in common is their outsider status. Both rose to the runoff on the disenchantment of Tunisians, particularly young people and the poor, who feel the governing class hasn't fulfilled the promises of the 2011 "jasmine revolution" that unleashed revolts around the Arab world.

"I just hope that everything that will happen in the next five years will be better for Tunisia," said voter Elfi Zaouarda, casting a ballot in Tunis.

Karoui, a glib, 56-year-old media mogul, spent most of the campaign behind bars on accusations of money laundering and tax evasion that he calls politically driven.

Saied was seen as the slight favorite, thanks to an enthusiastic youth campaign machine that cheers him on Twitter and backing from the No. 1 and No. 3 parties in the new parliament: Ennahdha and the Al Karama Coalition.

More than 100,000 police, soldiers and security forces guarded the 15,000 polling stations, notably on the borders with Libya and Algeria, and thousands of local and foreign observers monitored the vote.

During an unprecedented TV debate, Karoui promised to combat terrorism by "attacking at its roots" and raising economic prospects in struggling provinces that are fertile recruiting grounds for the Daesh terror group and other terrorists.

A self-proclaimed modernist, he said he would seek partnerships with companies such as Microsoft, Google and Netflix to create jobs, and holds up women as pillars of society.

After their televised debate Friday, they cordially shook hands — a gesture Tunisians celebrated as a sign that their democracy is on the right track.

But whoever wins the presidency of Tunisia has tough challenges ahead leading this country of 11 million people. In addition to economic and security troubles, Tunisia is both a source of migrants trying to reach Europe and a transit country for migrant trafficking from elsewhere in Africa.

The new president will also have to work with a fractious parliament, the result of legislative elections on Oct. 6 that gave no party a clear majority.