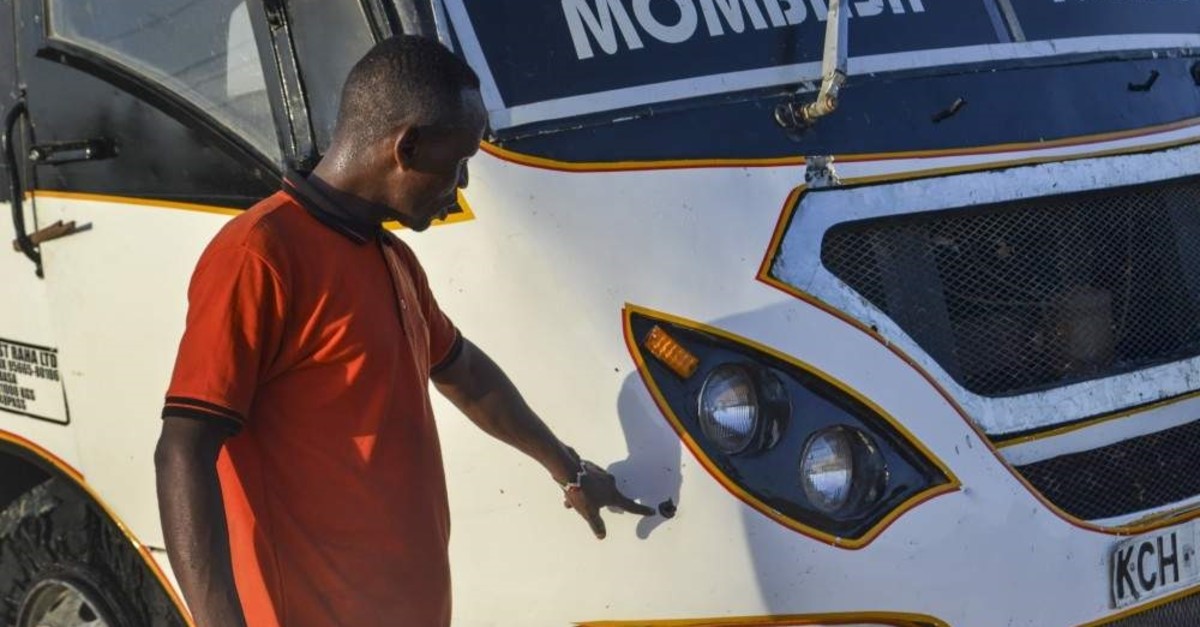 A man points at a bullet-hole on a bus which was ambushed by al-Shabab gunmen in the Nyongoro area of Lamu county, near the Indian Ocean coast of Kenya Thursday, Jan. 2, 2020. Kenyan police say four people have been killed in two ambushes. (AP Photo)
by Associated Press Jan 02, 2020 9:58 pm

Kenyan officials say four people were killed Thursday when a convoy of passenger buses was fired on by terrorists in the country's eastern coastal area.

Somalia's al-Shabab terrorists have claimed responsibility for the attack.

The gunmen fired at a convoy of three buses and two vans that were being escorted by police to Lamu, said Lamu County Commissioner Irungu Macharia.

Four were killed when the vehicles were sprayed with gunfire by attackers in the Nyongoro area of Lamu county along Kenya's Indian Ocean coast, he said.

The first bus was hit with bullets on its side and tires but the driver managed to speed away, he said. Other vehicles in the convoy stopped and the gunmen opened fire at passengers fleeing on foot into the bushes, he said.

The police escort had been delayed and was behind the convoy but arrived in time to prevent a massacre, he said. Police escorts for passenger vehicles in the area became mandatory after 2014 when al-Shabab killed nearly 90 people in two attacks in Lamu county.

Al-Shabab claimed responsibility for the attack on its Andalus radio station.

When the terrorists opened fire, three passengers were shot at close range and died instantly, said a police report on Thursday's attack seen by the Associated Press. The fourth fatality was a conductor of one of the buses, it said. It said two other passengers were wounded.

Mombasa County Governor Ali Hassan Joho condemned the attack. "This is unacceptable in this day and age. We have no choice but to be accommodating and tolerant to one another," he said in a tweet.

In recent weeks, ahead of the New Year, Somalia's al-Shabab terrorists have stepped up attacks in Kenya whose troops are in Somalia fighting the terrorists. The militants have vowed retribution on Kenya for sending its troops to Somalia.

"It's unfortunate but to be expected," said security analyst Andrew Franklin, a former U.S. Marine who is a longtime resident of Kenya.

"There is low-intensity conflict going on and they (government officials) are not treating the situation in the five front-line counties with the seriousness it deserves," he said, referring to Tana River, Lamu, Wajir, Mandera and Garissa counties, which neighbor Somalia and have been listed by the government as hot-spots for terrorist activity.

The Kenyan government does not have adequate measures in place to rapidly respond to ambushes, he said. Police are not properly equipped and trained and the vehicles they use are not appropriate for use in rural areas, he said. Nor do police have enough personnel to respond effectively, he said.

"Al-Shabab has the tactical initiative. It decides when and where to launch an attack and all we do is react," he said.

Al-Shabab stepped up attacks in Kenya in December. The group killed 11 people in Mandera county, eight of them police officers returning to duty, who were pulled from a bus on Dec. 6. The group killed two construction workers in Garissa county on Dec. 17 and on Dec. 22 burned construction equipment owned by a contractor that was being used to develop a road in Mandera.

On Dec. 27, two security officers died and seven other policemen were wounded when a roadside bomb tore through their patrol vehicle in Wajir county.

The series of attacks shows a different picture than the government's claims that the threat of terrorists is being controlled, said security analyst Franklin.

"It flies in the face of what the government is saying, which is that things are getting better or that al-Shabab is a ragtag militia on its back-foot."