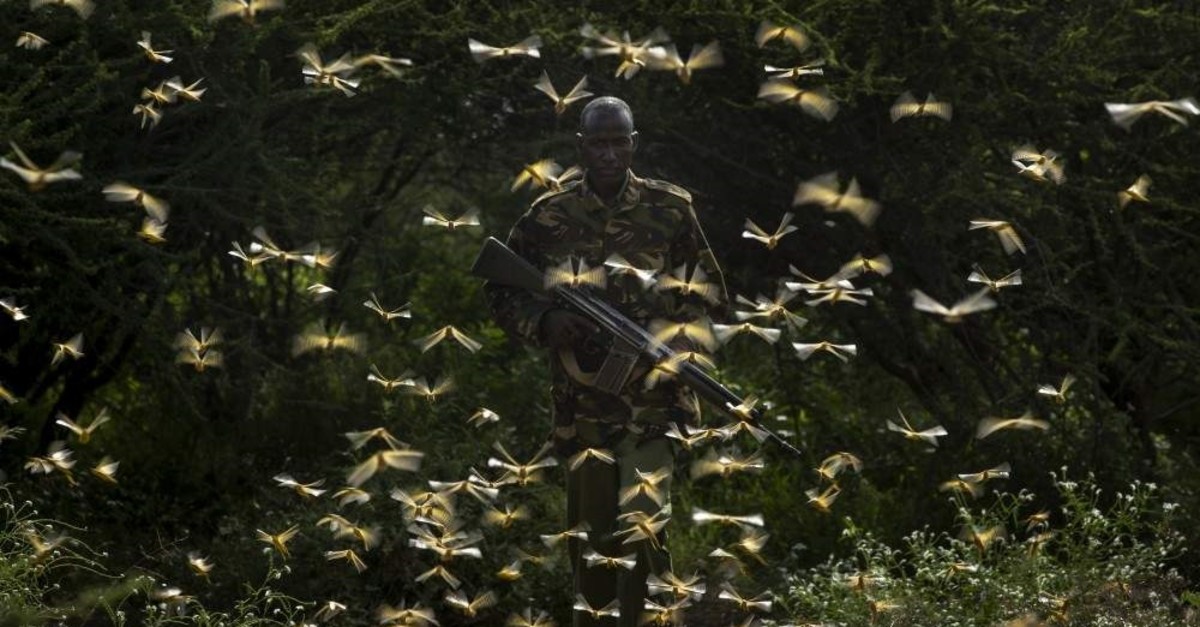 A ranger is surrounded by desert locusts as he and a ground team relay the coordinates of the swarm to a plane spraying pesticides, Nasuulu Conservancy, Feb. 1, 2020. (AP Photo)
by Compiled from Wire Services Feb 02, 2020 10:34 pm

Somalia declared Sunday a locust infestation, sweeping the Horn of Africa, to be a national emergency, the first country in the region to do so, while locusts appeared in the Ethiopian capital Addis Ababa as the infestation makes its way across East Africa.

Experts say the locust swarms are the result of extreme weather swings and Somalia's declaration is aimed at boosting national efforts in tackling the hungry insects.

As locusts by the billions descend on parts of Kenya in the worst outbreak in 70 years, small planes are flying low over affected areas to spray pesticides in what experts call the only effective control. Officials have warned that the outbreak, could lead to famine in a region already struggling with food insecurity.

The infestation has affected Ethiopia, Somalia, Kenya, Eritrea and Sudan and threatens to spread to Uganda and South Sudan. When rains arrive in March and bring new vegetation across much of the region, the numbers of the fast-breeding locusts could grow 500 times larger before drier weather in June curbs their spread, the U.N. says.

The locust infestations were also seen in other parts of the world. Pakistan has declared a national emergency to battle the swarms of desert locusts which are eating crops on a large scale and raising fears of food insecurity. "We are facing the worst locust infestation in more than two decades and have decided to declare a national emergency to deal with the threat," Information Minister Firdous Ashiq Awan said Saturday.