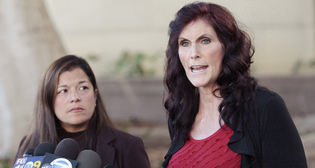 Cindy Lee Garcia, actress in Innocence of Muslims said the producer gave her a dıfferent script and dubbed the offensive lines over her voice

U.S Federal court ruled in favour of the actress and has ordered Google to remove the video from YouTube.

YouTube, which is owned by Google, had refused requests to remove the film from the website, arguing only the filmmaker and not the actress, Cindy Lee Garcia, owned the copyright and thus had the authority to take the video down.

The video dishonors the Prophet in an abhorrent manner, mocking his message and using inflammatory words to describe his character. Nakoula Basseley the film maker of the Innonce of muslims has been convicted for fraud in 2010.

The Los Angeles Times said that it was while he was in prison that he read the Quran, looking for ways to criticise Islam. Nakoula, also goes by the name of Sam Bacile, Nicola Bacily and Mark Basseley Yousseff is believed to be an Egyptian-American Coptic Christian.
Last Update: Feb 27, 2014 3:33 pm
RELATED TOPICS