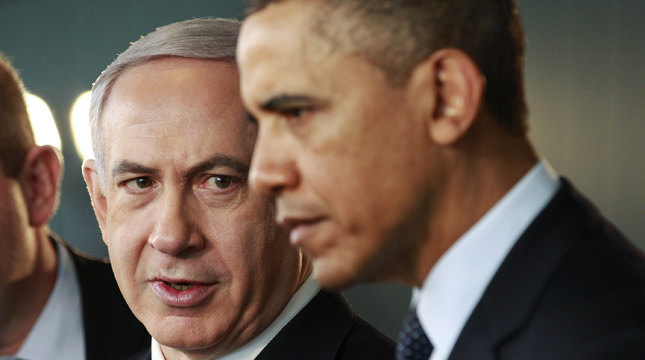 Issues dominating talks will include the Ukrainian crisis, Iranians peace talks and Israel settlements in Palestine

With time running out for a framework Israeli-Palestinian deal to salvage a troubled U.S.-brokered peace process, Obama and Netanyahu sparred in public comments in the run-up to a meeting that will also focus on Iran's nuclear program.

Netanyahu arrived in Washington to a veiled warning from Obama that he would tell the Israeli leader the United States would find it harder to defend Israel against efforts to isolate it internationally if peace efforts failed.

Boarding his flight to the U.S. capital, Netanyahu, who has had a strained relationship with Obama, said that Israel knew how to resist pressure and that he intended to stand firm on what he termed his country's "vital interests."

Secretary of State John Kerry has been trying to persuade Netanyahu and Palestinian President Mahmoud Abbas to agree to a framework deal that would enable troubled land-for-peace negotiations to continue beyond an April target date for a final accord. Abbas is due at the White House on March 17.

"When I have a conversation with Bibi, that's the essence of my conversation: If not now, when? And if not you, Mr. Prime Minister, then who? How does this get resolved?," Obama, using Netanyahu's nickname and borrowing from the Jewish rabbinical sage Hillel, said in an interview with Bloomberg View.

While the Palestinian issue and Western powers' nuclear talks with Iran are expected to dominate the Netanyahu-Obama meeting, the Israeli leader's visit is likely to be overshadowed by the crisis in Ukraine.

Obama spent much of the weekend scrambling to ease the situation, including a long phone call with Russian President Vladimir Putin in which the U.S. president warned of economic and political isolation if Moscow did not withdraw its troops from Ukraine's Crimea region.