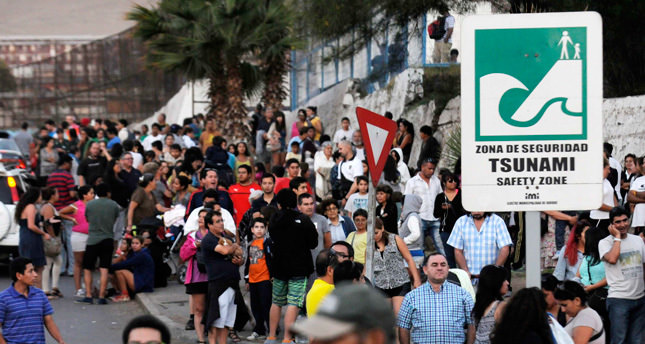 by French Press Agency - AFP Mar 17, 2014 12:00 am
Chile – A powerful magnitude 7.0 earthquake jolted Chile's northwestern coast Sunday, US geologists said, though there were no immediate reports of major damage or injuries.

The quake struck at 5:16 pm (2116 GMT), according to the US Geological Survey, which had originally said that two quakes rattled the area within a minute of each other.

Located 61 kilometers (38 miles) northwest of the port city of Iquique, the temblor was 35 kilometers deep.

Chile's national Emergency Office (Onemi) said there were no immediate reports of injuries or damage to infrastructure.

"There is a likelihood of a local tsunami being created between the towns of Arica and Tocopilla," so a preventive evacuation was ordered there, the Onemi added.

Meanwhile, the US National Weather Service's Pacific Tsunami Warning Center said in a bulletin that "earthquakes of this size sometimes generate local tsunamis that can be destructive along coasts located within a hundred kilometers of the earthquake epicenter,"
"Authorities in the region of the epicenter should be aware of this possibility and take appropriate action."

But it later cautioned that "based on all available data, a destructive Pacific-wide tsunami is not expected and there is no tsunami threat to Hawaii."
Last Update: Mar 17, 2014 9:48 am
RELATED TOPICS