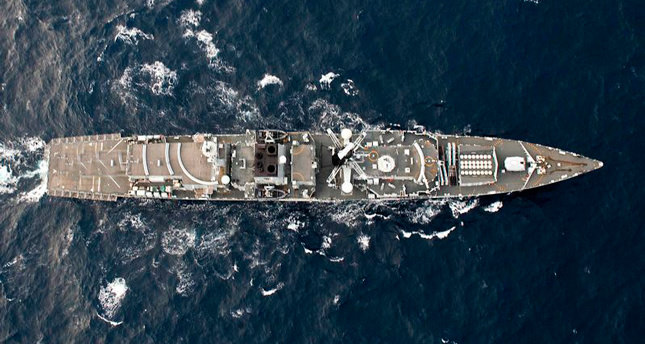 by reuters
Apr 06, 2014 12:00 am
SAN DIEGO — A U.S. Navy frigate was expected to reach an American family and their seriously ill infant on a faltering sailboat in the Pacific Ocean shortly after dark on Saturday, a Coast Guard official said.

The frigate Vandegrift, carrying a helicopter and a crew of 200, left San Diego on Friday, bound for the sailboat of Eric and Charlotte Kaufman.

The Kaufmans sent out a distress call by satellite from their boat, named Rebel Heart, on Thursday about 1,000 miles (1,600 km) off Mexico's Pacific coast, said Navy and Coast Guard officials.

The Kaufmans, along with their daughters Cora, 3, and 1-year-old Lyra, sailed from Mexico on March 19 toward islands in the South Pacific and eventually New Zealand, according to therebelheart.com, where they have been writing about their sometimes stormy voyage.

With their younger daughter taken ill, the Kaufmans sounded a distress signal, prompting a team from the California Air National Guard's 129th Rescue Wing to fly out to sea in a military transport plane from their base at Moffett Federal Airfield near San Francisco, said spokesman Second Lieutenant Roderick Bersamina.

Four men, laden with medical gear and other supplies, parachuted from the plane into the ocean, inflated a dinghy, motored toward the boat and boarded to treat the girl.

"They took it upon themselves to do whatever necessary to save her life," Bersamina said. He could not confirm the nature of her ailment, but said she had been treated and was stable.

"The family is in good spirits and very thankful for the pararescuemen who are on board," he said. "Granted, it is cramped quarters."

The rescue team found problems with the 36-foot (11-meter) boat's steering and communication systems, he said.

A decision about how to get the family back to dry land will be made once the frigate arrives, assuming the baby's health remains stable, Bersamina said.

The frigate was expected to reach the sailboat an hour after dark on Saturday but would not start heading back to land until light of day on Sunday, said Anna Dixon, a Coast Guard spokeswoman in California.

"The first priority will be getting those people aboard," Dixon said. The Coast Guard and Navy have coordinated efforts in the rescue operation, she said.

The Air National Guard had also deployed two rescue helicopters and two rescue planes that were on standby on Saturday in Cabo San Lucas, Mexico, in case a rapid air evacuation is necessary, Bersamina said.

The four pararescuemen will remain on board with the family in the meantime. "They will not leave the family until the infant is in the care of a doctor," Bersamina said.

The California Air National Guard is part of the state's militia. Its primary mission is rescuing military personnel during wartime, but has been involved in scores of rescue missions involving civilians in distress, whether out at sea or lost in the mountains, Bersamina said.