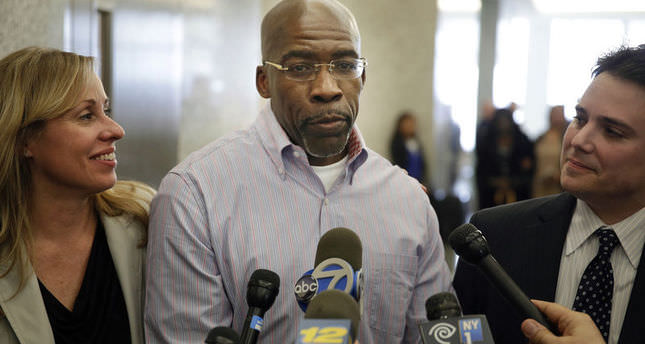 by Associated Press
Apr 10, 2014 12:00 am
NEW YORK — A group of convicts who say they were framed by a corrupt New York City detective urged a New York City prosecutor Wednesday to speed up an ongoing review of potentially tainted murder investigations, some decades old. The demand came at a rally on the steps of City Hall, one day after a Brooklyn man convicted of murder in 1989 and serving a sentence of 25 years to life,

Jonathan Fleming, was released on new evidence that established he was in Florida around the time of the killing. "Just yesterday, an old man who used to be a young man was freed," said Lonnie Soury, one of the organizers. "We've been asked to be patient. But ı say, we have been patient for decades."

The review of several murder cases investigated by the now-retired detective, Louis Scarcella, began last year after another man convicted of murder was released on new evidence that Scarcella had coached a witness to pick him out of a lineup. Since then, other convicts have renewed allegations that Scarcella fabricated confessions, manipulated witnesses and intimidated them.

Newly elected Brooklyn district attorney Ken Thompson, who came into office promising to make addressing allegations of wrongful convictions a priority, said in statement Wednesday that a revamped conviction review unit remains hard at work. "While we understand the need to work quickly, we are not willing to sacrifice thoroughness for speed in the pursuit of justice," he said.

Some of the men at Wednesday's rally were paroled after serving lengthy sentences, but still seek vindication. They and their supporters wore caps emblazoned with "Wrongfully Convicted" on the front and "Victims of Detective Scarcella" on the side.

Derrick Hamilton, who was paroled in 2011 after doing 21 years for a 1991 murder, claims Scarcella coerced an eyewitness to change her testimony and implicate him in the killing. "ı feel violated, humiliated," Hamilton told the crowd. "How long must we wait for justice?"

Scarcella has denied any wrongdoing. His lawyers, Alan Abramson and Joel Cohen, noted that so far, no one else investigated by their client has been cleared in court. The former detective wasn't involved in the Fleming case. "We welcome the review," Abramson said. "Let the unit do its work."
Last Update: Apr 10, 2014 9:53 pm