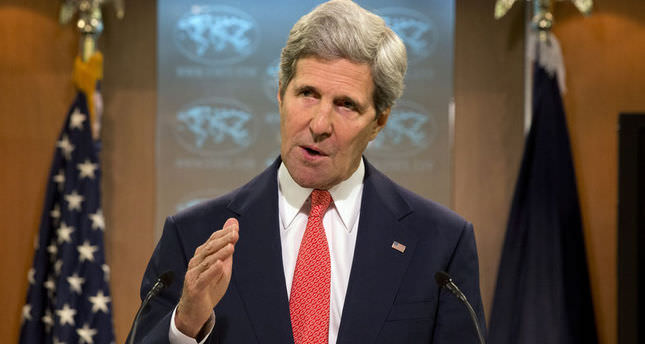 by AA Apr 25, 2014 12:00 am
WASHINGTON, D.C. — Russia should be prepared to pay a hefty price if it continues to threaten Ukraine, America's top diplomat warned Thursday.

"Following today's threatening movement of Russian troops right up to Ukraine's border, let me be clear: If Russia continues in this direction, it will not just be a grave mistake, it will be an expensive mistake," U.S. Secretary of State John Kerry said while speaking to the press at the State Department.

His comments come as Russia launched new military exercises on its border with Ukraine.

The U.S. and its western allies maintain that Russia is behind continued unrest in eastern Ukraine.

"The window to change course is closing," said the U.S. secretary. "If Russia chooses the path of de-escalation, the international community -- all of us -- will welcome it. If Russia does not, the world will make sure that the cost for Russia will only grow."

On Thursday, Ukraine's Interior Ministry said five pro-Russian "militants" manning checkpoints outside the separatist stronghold of Slavyansk had been killed in "anti-terror" operations, with one government officer injured.

Ukrainian foreign minister vowed his country was ready to fight Russian troops after Moscow announced the military drills on the Ukrainian border.