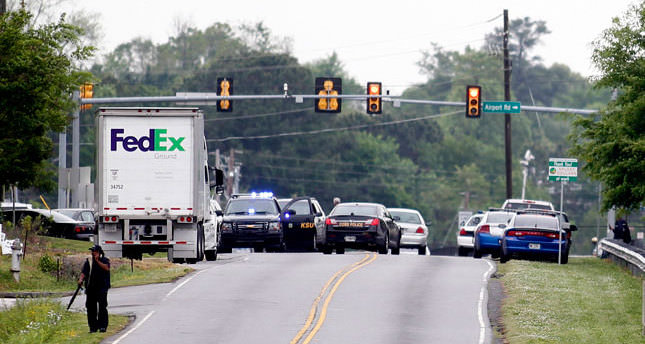 by Apr 29, 2014 12:00 am
ATLANTA — A FedEx Corp package handler armed with a shotgun opened fire at a shipping facility in suburban Atlanta early on Tuesday, injuring six people before killing himself, apparently with his own weapon, police and hospital officials said. Three people were in critical condition, two of them with life-threatening injuries, after being shot by the unidentified gunman just before 6 a.m. EST at a FedEx warehouse near the airport in Kennesaw, Georgia, about 30 miles northwest of Atlanta, police and hospital officials said.

FedEx employee Liza Aiken told the Atlanta Journal-Constitution she was correcting addresses on packages when she saw a 19-year-old colleague dressed all in black and armed with a knife, gun and a cartridge belt strapped across this chest. "He had bullets strapped to his chest like Rambo," she told the newspaper. "He looked like he was heading into war." Aiken said she previously had reported the man to her superiors after he pointed a work laser at her eye. Michael Hogland, a driver at the facility, told the paper his boss called him early Tuesday and said a security guard was among the shooting victims.

Law enforcement did not immediately identify the shooter, who worked as a package handler, said Cobb County Police spokesman Mike Bowman. No motive was given for the attack. The six patients taken to WellStar Kennestone Hospital in Marietta all had multiple gunshot wounds that appeared to be from a shotgun, Dr. Michael Nitzken said at a news conference. Two men, 28 and 22 years old, as well as a 52-year-old woman were listed in critical condition. Another 28-year-old man was stable, while a 42-year-old woman and 19-year-old man had been treated and were being released, Nitzken said.

Hundreds of police from multiple agencies converged on the scene after the shooting, and employees escorted from the facility in a bus tearfully reunited with family members at a nearby skating rink. A FedEx spokeswoman extended condolences to those affected by the shooting. "The situation is now stabilized, and we are focused on the needs of our team members and cooperating with the law enforcement investigation of this tragedy," said company spokeswoman Shea Leordeanu.