#UkraineCrisis: Russians, US in Hashtag Battle 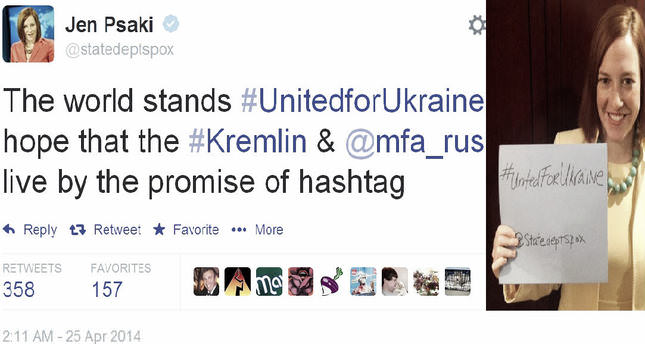 ISTANBUL — A tweet by State Department spokeswoman Jen Psaki Thursday night sparked snarky Twitter responses about the diplomacy of a hashtag – but the tweet really is more evidence of a brewing social media Cold War between the U.S. and Russia.

The world stands #UnitedforUkraine. Let's hope that the #Kremlin & @mfa_russia will live by the promise of hashtag


Psaki was responding to the Russian Foreign ministry hijacking the State Department's #UnitedForUkraine campaign by posting its own version of events while using the hashtag.


#UnitedForUkraine isn't the only hashtag to be reappropriated by Russia. In the last few weeks, State's #RussiaIsolated hashtag regarding Russia's actions in Crimea sparked a series of tweets from Russian embassies around the world mocking the campaign by tweeting positive messages about Russia and including #russiaisolated.


It is not the first time that Russia has tweaked the United States over its hashtags. The U.S. Embassy in Moscow spelled Russia wrong earlier this month in a tweet.
The Russian Foreign Ministry shot back with a wry Facebook post telling the State Department that before distributing "spam," "it would not be bad to learn to correctly spell the name of the country in which you are working"
Last Update: Apr 29, 2014 1:12 pm