Toronto Mayor Ford drops out of elections into rehab 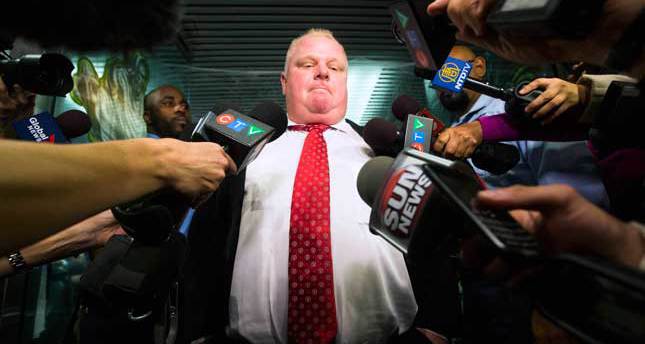 by May 01, 2014 12:00 am
TORONTO, Canada — Mayor Rob Ford of Toronto said on Wednesday he will take time off to get professional help to deal with a drinking problem, even as a Canadian newspaper reported a new video showed him using what appeared to be drugs.

Ford, who gained global notoriety after admitting to smoking crack cocaine, said he would take a leave from his duties as mayor and re-election campaign to seek immediate help.

"I have a problem with alcohol, and the choices I have made while under the influence. I have struggled with this for some time," he said in a statement released by his campaign team.

"I have tried to deal with these issues by myself over the past year. I know that I need professional help and I am now 100 percent committed to getting myself right. I love the people of Toronto, I love being your mayor and I hope you will continue to stand by me."

Allegations about Ford's drug use began in May of last year, when two media outlets said they had seen video of him smoking from what appeared to be a crack pipe.

He initially said he did not smoke crack cocaine, before admitting in November that he had done so. He said at the time it probably happened "in one of my drunken stupors," but insisted he was not an addict

The Globe and Mail newspaper said on Wednesday that two of its reporters had seen a new video of Ford taking a drag from a long copper-colored pipe.

Ford's office and lawyer could not immediately be reached to comment on the report. Reuters has not seen the video and cannot vouch for its authenticity.

Separately, the Toronto Sun newspaper reported on Wednesday that it had obtained a new audio recording of Ford ranting and swearing in a Toronto area bar. The recording includes lewd remarks about a rival female candidate in the mayoral race.

Ford, who came to power in 2010 on a platform of cost-cutting and low taxes, has billed himself as a champion of taxpayers and ordinary people.

But last year's revelation about crack use and his decision to remain in office made headlines globally and drew ridicule from U.S. late-night talk show hosts.

Ford pledged at the time that he would stay away from drugs and alcohol.

In January, a video was posted online showing Ford ranting in a Jamaican accent and slurring his words at a suburban eatery. He conceded he had been drinking the night the video was shot, but described it as a "minor setback" and said his personal life did not interfere with his job.

Ford, who has been stripped of many of his powers by the city council, had refused calls to step down and said he expects to be returned to office in October's municipal elections.