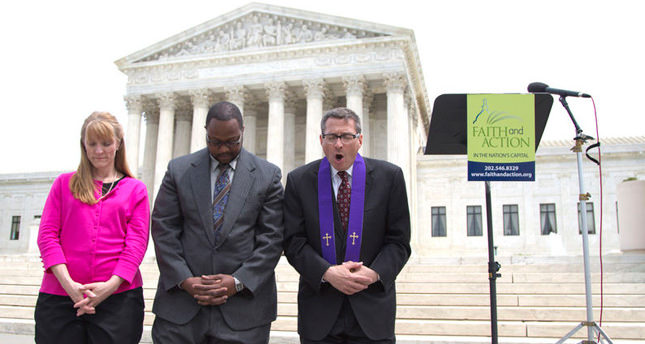 by May 06, 2014 12:00 am
NEW YORK, U.S. — The U.S. Supreme Court on Monday gave local government officials across the United States more leeway to begin public meetings with a prayer, ruling that sectarian invocations do not automatically violate the U.S. Constitution.

The court said on a 5-4 vote that the town of Greece in New York state did not violate the Constitution's ban on government endorsement of religion by allowing Christian prayers before monthly meetings.

Although such prayers have long been a tradition in some communities, the high court had never before expressly said sectarian prayers could be constitutional in some circumstances or specifically held that prayers could be given before meetings of local government entities.

In Monday's closely divided decision, the court said a prayer could violate the Constitution if there was an attempt to intimidate, coerce or convert nonbelievers.

Politicians from both major political parties, including President Barack Obama, a Democrat, had backed the town. Kentucky Republican Mitch McConnell, the minority leader in the U.S. Senate, said in a statement the court had "reaffirmed the strong constitutional footing of this important American tradition."

Although the ruling referred only to legislative prayer, it could give a boost to government officials seeking to promote religion in public life in other contexts, such as sectarian religious displays in civic buildings.

The court was divided along ideological lines, with the conservative wing saying the prayers were acceptable, while the liberal justices said the prayers in question violated the First Amendment. The five justices in the majority are Roman Catholic. Of the four dissenters, three are Jewish and one is Catholic.

Although the policy in Greece, a town of 100,000 people, does not embrace a particular religion, all members of the public who gave a prayer were Christians until two residents filed suit in 2008. Some of the prayers featured explicitly Christian references, including mentions of Jesus Christ and the Holy Spirit.

The court focused on whether the content of the prayers constituted coercion. Finding there was none, Kennedy wrote that "offense ... does not equate to coercion."

But the court did set some limits, with Kennedy saying prayers that "denigrate nonbelievers or religious minorities, threaten damnation or preach conversion" might not pass muster.

Writing on behalf of the four liberals, Justice Elena Kagan said that for years the prayers in Greece were sectarian and the town did nothing to encourage members of other faiths to give the prayers.

Greg Lipper, a lawyer with Americans United for Separation of Church and State, said the ruling was likely to have the most impact in towns with large Christian communities.

The case reached the high court after the 2nd U.S. Circuit Court of Appeals in New York ruled against the town in May 2012. A district court had previously supported the town's position by dismissing the lawsuit filed by Galloway and Stephens.