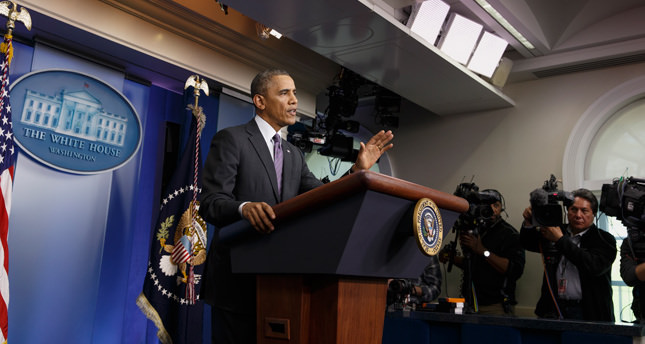 by Hakan Baş May 09, 2014 12:00 am
WASHINGTON D.C. — As U.S. President Barack Obama plans to make it more expensive for Russian banks to do business in America, he is also preparing a new move: removing special trade benefits for Russia As the U.S. attempts to punish Russia for its actions in Ukraine, the Obama Administration is dealing consecutive blows to the Kremlin. On Monday, the Treasury Department announced plans to deploy an economic weapon that could prove more costly than sanctions: the Internal Revenue Service.

According to the plan, this summer, the U.S. will start using a new law that will make it more expensive for Russian banks to do business in America. The new law means that Russian banks that buy U.S. securities after July 1 will forfeit 30 percent of the interest and dividend payments.

The withholding applies to stocks and bonds, including U.S. Treasuries. After the announcement of this plan, Russian President Vladimir Putin pressed pause on Wednesday in what had started to look like an inevitable march toward war. Putin told a news conference at the Kremlin that Russia had withdrawn its troops from along the border and that he had asked separatists to drop plans for a referendum on sovereignty this Sunday. Russia would even accept Ukraine's presidential election on May 25, he said, if demands for autonomy from the country's east were recognized.

That means Putin saw the Obama administration's hand. So, Obama on Wednesday put a new economic leverage against Putin in the Ukraine crisis: special trade benefits. Obama is removing special trade benefits for Russia because the country is too economically advanced to need them and Moscow's involvement in Ukraine made it an appropriate time to take the step, the White House announced Wednesday. Obama notified Congress that he plans to remove Russia from the Generalized System of Preferences program, which gave Moscow a $544 million break on import taxes in 2012 on products ranging from metals and minerals to tires and ceramic wares.

The program, which allowed $19.9 billion in imports to enter the U.S. duty-free in 2012, is designed to help developing countries boost their economy through trade. The program expired in July 2013, but the Obama administration supports legislation under consideration in Congress to extend it. The White House says Russia's removal will mean its goods will be subject to normal tariff rates once Obama issues a proclamation, which can be no sooner than 60 days from congressional notification. National Security Council spokesperson Caitlin Hayden said Russia was set to be eliminated from the program on Jan. 1, 2016, after being upgraded to high-income status by the World Bank last year, but Obama decided to move forward ahead of schedule. "Russia's actions regarding Ukraine, while not directly related to the president's decision regarding Russia's eligibility for GSP benefits, make it particularly appropriate to take this step now," she said. The announcement comes on the day that Putin said his country had pulled troops back from the border it shares with Ukraine. But the White House was skeptical of the claim.