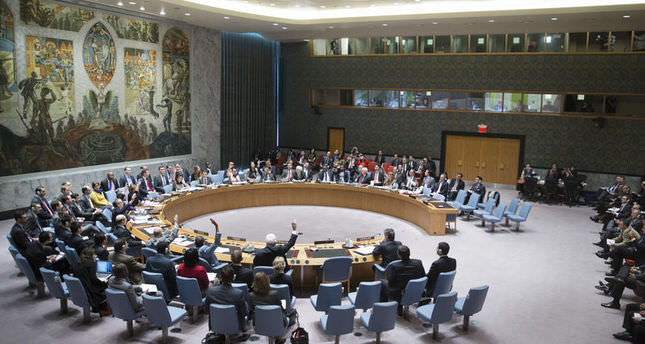 by AA May 23, 2014 12:00 am
NEW YORK — Russia and China have vetoed Thursday a UN Security Council resolution drafted by France, calling for the International Criminal Court to investigate alleged war crimes and human rights violations in Syria.


Thursday's move was the fourth UN Security Council resolution on Syria vetoed by Russia and China.

The draft resolution offered by France included the referral of the situation in Syria since 2011 to the Prosecutor of the International Criminal Court, and stressed that the situation in Syria was a threat to international peace and security. It also condemned the crimes that the Syrian pro-regime armed groups and other non-governmental militia groups had committed since March 2011.

Thirteen countries backed the resolution. The veto power is restricted to the five permanent members, -- China, France, Russia, U.K. and the U.S.

In order to conduct war-crime investigations in Syria, the issue needs to be handed over to the International Criminal Court by the UN Security Council because Syria is not a party to the Rome Statute of the court.

The civil war, which entered its fourth year, has claimed more than 140,000 lives, according to the London-based Syrian Network for Human Rights.

Since March 2011, government forces have used more than 1,300 barrel bombs that have killed more than 947 citizens, including 189 children, according to the network.

UN says nine million Syrians have been displaced with around 2.5 million seeking refuge in the neighboring countries Turkey, Lebanon, Jordan and Iraq.
Last Update: May 23, 2014 11:38 am
RELATED TOPICS