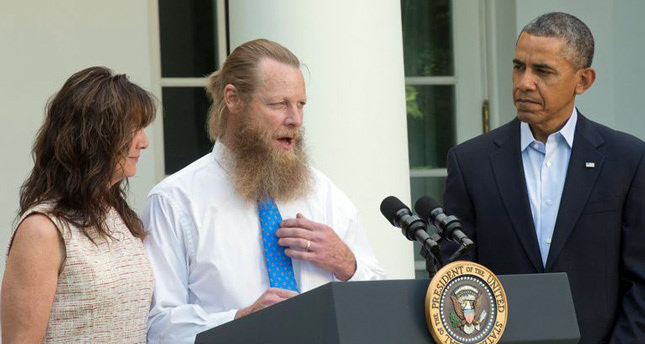 by Jun 02, 2014 12:00 am
WASHINGTON — U.S. politicians questioned whether the deal that freed Bowe Bergdahl in exchange for five Taliban militants amounted to a negotiation with terrorists as the U.S. soldier was flown out of Afghanistan to a military hospital in Germany on Sunday.

Army Sergeant Bergdahl, held for nearly five years in Afghanistan, was freed in a deal with the Taliban brokered by the Qatari government. Five Taliban militants, described by Senator John McCain as the "hardest of the hard core," were released from the U.S. prison at Guantanamo Bay, Cuba and flown to Qatar.

While Bergdahl's released on Saturday was celebrated by his family and his hometown, and could be seen as a coup for President Barack Obama as he winds down America's longest war, McCain and other Republicans questioned whether the administration had acted properly in releasing the militants.


As the Obama administration sought to counter the criticism, Bergdahl was flown to Landstuhl Regional Medical Center in Germany for medical treatment. After receiving care he would be transferred to another facility in San Antonio, Texas, U.S. defense officials said, without giving a date for his return to the United States.

U.S. Defense Secretary Chuck Hagel said he hoped the exchange might lead to breakthroughs in reconciliation with the militants and rejected accusations from Republicans that it resulted from negotiations with terrorists, saying the swap had been worked out by the government of Qatar.(Full Story)

"We didn't negotiate with terrorists," Hagel said in an interview on NBC's "Meet the Press". "As I said and explained before, Sergeant Bergdahl was a prisoner of war. That's a normal process in getting your prisoners back."

Bergdahl, 28, was handed over on Saturday to U.S. forces who had flown in by helicopter. The Taliban said they had released Bergdahl near the border with Pakistan in eastern Afghanistan.

The prisoner exchange deal came days after Obama outlined a plan on Tuesday to withdraw all but 9,800 American troops from Afghanistan by the end of the year and the remainder by 2016, ending more than a decade of U.S. military engagement.