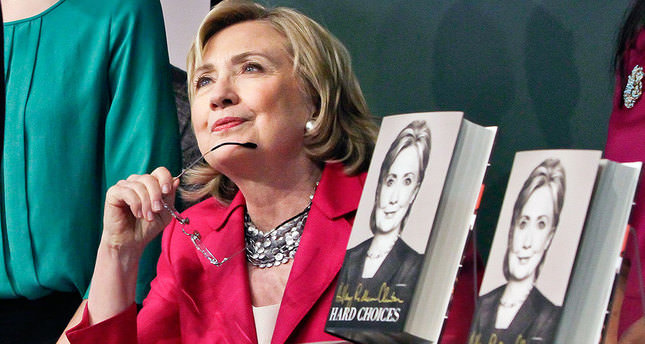 by AA Jun 11, 2014 12:00 am
"One man in particular held the key to the future of Turkey and of our relationship: Prime Minister Erdoğan," writes Hillary Clinton, former US Secretary of State, in her newly released book titled "Hard Choices."

Considered as the foundation for Hillary Clinton's candidacy for the 2016 US presidential election, "Hard Choices" describes her four years - from 2008 to 2012 - as Secretary of State under President Barack Obama.

In the book, the former Secretary of State not only wrote about her visits around the world but also shared her perspective on key policies and key political figures from different countries.

Stating that she first met Erdoğan in the nineties when he was Istanbul's mayor, Clinton describes Erdoğan as "an ambitious, forceful, devout and effective politician."

"Turks first elected his Islamist Party in 2002 and reelected them in 2007 and 2011," she writes. "Prime Minister Erdoğan viewed all three elections as mandates for sweeping change. His government aggressively went after alleged coup plotters in the military and managed to gain a tighter grip on power than any of its civilian predecessors."

Clinton goes on saying that, under Erdoğan, Turkey has been testing whether democracy, modernity, woman's rights, secularism and Islam could co-exist.

Despite positive developments in the country, writes Clinton, arrests of journalists, the hard crackdown on Gezi Park protests in May 2013 and the probe against high-ranking government officials on graft allegations have constrained Erdoğan's leadership.

Clinton insists on the fact that it is in American interests to encourage all religion-based political parties and leaders to embrace inclusive democracy, referring to Erdoğan's AK Party and its vision for Islam in politics.

Clinton writes that Turkey will continue to play a significant role in both the Middle East and Europe and remain of vital importance to the US.

Turkish economy boomed with one of the fastest growth rates in the world, adds Clinton.

"As the rest of Europe staggered under financial crisis and the Middle East stagnated, Turkey emerged as a regional powerhouse," she notes.

She also praises Turkey's policy of wanting "zero problems with neighbors," describing it as an overall constructive policy, which paves the way for solutions in "long running disputes" in, for instance, Cyprus as well as "frozen conflicts" such as the Turkish-Armenian dispute over 1915 events. Clinton adds that she put all her efforts to ameliorate Turkish-Armenian relations.

Still, she writes, the "zero problems" philosophy "also made Turkey overeager to accept an inadequate diplomatic agreement with its neighbor Iran that would have done little to address the international community's concerns about Tehran's nuclear program."

Recalling the Israeli raid on Turkish ship, Mavi Marmara in 2010 which killed eight people, Clinton writes that she had to calm down Turkish Foreign Minister Ahmet Davutoğlu who considered the attack as "9/11 for Turkey" and managed to convince Turkey not to take any serious action against Israel.