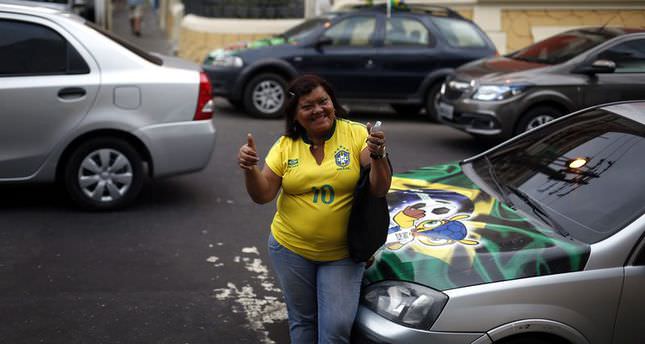 by AA Jun 12, 2014 12:00 am
With just a day to go before the World Cup, São Paulo is bracing itself for Thursday's opening ceremony and first match of the tournament between hosts Brazil and Croatia.

Around 600 performers are set to dazzle crowds in a routine that will include gymnastics and Brazil's famous martial art, capoeira, before culminating in a performance of the official World Cup song "We Are One" by performers Jennifer Lopez, Pitbull and Claudia Leitte, accompanied by legendary Bahian percussion band Olodum.

As well as the 60,000 spectators in the Arena Corinthians, São Paulo's World Cup stadium, it is thought that about a billion viewers around the world will watch the spectacle on television -- with up to three billion tuning in over the course of the four-yearly sporting mega-event.

However, the most poignant and symbolic part of the opening ceremony is likely to be the first touch of the ball -- not by a footballer, but by a paraplegic patient in an exoskeleton designed by Brazilian neuroscientist Miguel Nicolelis, as part of a historic kick-off to the tournament.

The opening ceremony will be watched by Brazilian President Dilma Rousseff and United Nations Secretary-General Ban Ki-moon, along with no fewer than 11 heads of state, according to Brazil's presidential palace.

The venue for the World Cup venue, the Arena Corinthians, is one of the most delayed of the 12 stadiums which were built or completely renovated for the tournament.

Security will be tight at the event, with restrictions affecting the area around the stadium, and whichever protest groups decide to hold demonstrations, President Rousseff has made clear that nothing will be allowed to disrupt the tournament.

Up to 180,000 public and private security personnel will be deployed to the 12 World Cup host cities at a cost of nearly 1.9 billion reais, or $840 million.

The cost of the entire event to the Brazilian government is estimated at around $14 billion.