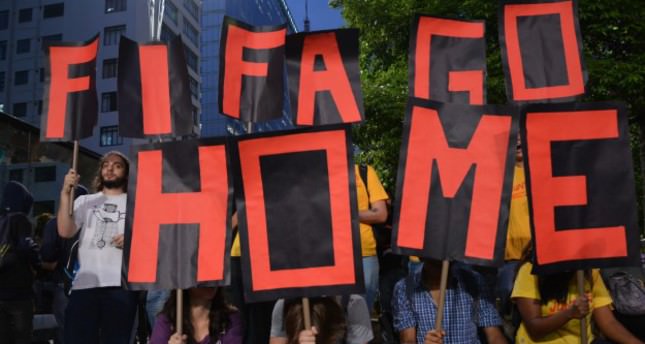 Brazilian police fear street demonstrations will erupt in violence prior to the World Cup's opening game on Thursday in Sao Paulo, as intelligence indicates a few hundred protesters will try to block roads leading to the stadium.

Police have used phone wiretaps and social media to gather information on protesters' movements and plans before the opener between Brazil and Croatia, which will attract 60,000 fans, leaders of world soccer body FIFA and about a dozen heads of state, including Brazilian President Dilma Rousseff.

Demonstrations have raged on and off since last June as Brazilians vent their anger against what they see as government overspending on the month-long tournament, among other issues.

At their peak, the protests drew more than 1 million people into the streets. They have been significantly smaller in recent months but police are worried about what they describe as a hard core of radicals, mostly young men, who have vandalized buildings and clashed with police at previous events.

Several protest groups have called on Facebook for their followers to gather in downtown Sao Paulo on Thursday at 10 a.m. (1300 GMT) and then head toward the Arena Corinthians, some 12 miles (20 km) east. The game is set to start at 5 p.m.

Surveillance indicates some protesters are planning to evade police barricades and cut off Radial Leste, a key thoroughfare that will be used by VIPs to get to the stadium, according to three officials informed of the intelligence.

Protesters or disgruntled subway workers who have taken strike action this month may also try to obstruct the train line that most fans will use to get to the game, the officials said.

"If the protesters try to keep fans from arriving, the situation could get ugly," one official said on condition of anonymity. "Police will keep the roads open, I guarantee."

Politicians ordered police to maintain a hands-off stance throughout much of last year, when protests were composed largely of the middle class.

But the tone has hardened as the Cup draws closer and polls show that only about half of Brazilians approve of the protests, down from 89 percent last June.

Rousseff and others have recently emphasized they expect police to maintain order and ensure fans can arrive at games. More than 150,000 police and soldiers have been deployed in the 12 cities hosting games.

"There's no problem with protests, but what is not possible is vandalism of public or private property. We can't have that," Sao Paulo Governor Geraldo Alckmin said on Tuesday.