US ready to support Turkey after Iraq kidnappings: Biden 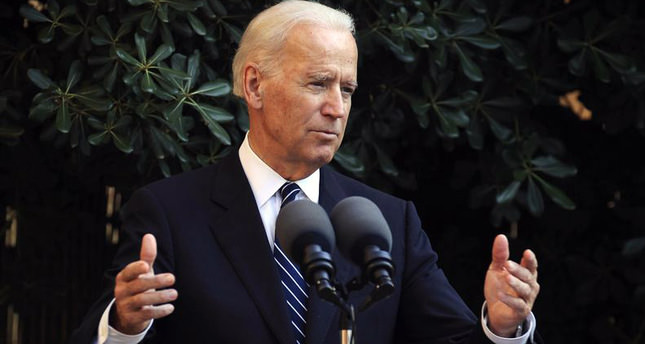 In a statement released by the White House it was stated that Biden spoke with Turkish PM Erdoğan regarding from the self pro-claimed Islamic State of Iraq and Levant (ISIL) stormed the Turkish consulate in the Iraqi city of Mosul, kidnapping 49 cosulate staff members including the consul-general and family members.

The statement underscored the United States condemned the actions taken by the terrorist group of ISIL, adding that U.S. would call for the safe and immediate return of the Turkish personnel and family members.

Biden also urged the Iraqi national and Kurdish security forces to work together to combat the ISIL threat.

"The Vice President told Prime Minister Erdogan that the United States is prepared to support Turkey's efforts to bring about the safe return of its citizens and will stay in close touch with the Turkish and Iraqi governments regarding a resolution to the security situation,"the statement said.

White House spokesman Josh Earnest also condemned the kidnapping in Mosul — Iraq's second-largest city -- and termed it as "despicable" in the daily briefing.

"The deterioration in security is rapidly becoming a humanitarian issue and requires a coordinated response by Iraqi leaders from across the country to halt the advances ISIL," said Earnest.

The incident comes a day after the terrorist group of ISIL took control of the city and seized 31 Turkish truck drivers who were transporting fuel to a thermal power plant.