US 'strongly condemns' attack on Turkish consulate in Iraq 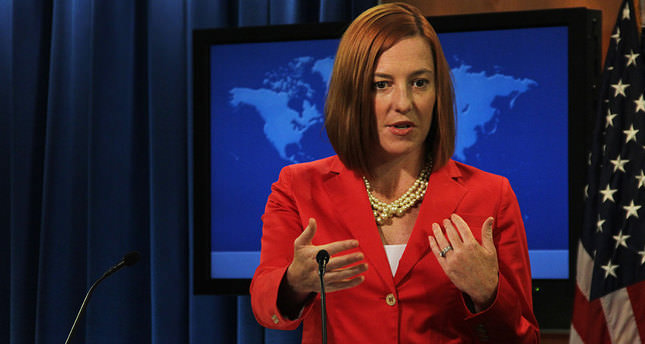 by AA Jun 12, 2014 12:00 am
The U.S. has condemned in the strongest terms Wednesday's attack by the militant group Islamic State of Iraq and Levant – or ISIL – on the Turkish consulate in Iraq's Mosul province.

"They discussed their mutual concern about the deteriorating security situation in Mosul and the ISIL's despicable attack on the Turkish consulate, which we condemn in the strongest terms," said Psaki.

"We join Turkey and the international community in calling for the immediate release of Turkey's kidnapped diplomatic personnel," she said.

"Secretary Kerry reiterated the United States' commitment to working with the Iraqi government and leaders across Iraq to support a unified approach against the ISIL's continued aggression. We are in touch with the governments of Turkey and Iraq and stand ready to provide any appropriate assistance," added Psaki.

The ISIL abducted 49 Turkish consulate staff members including the consul-general and family members in Mosul – Iraq's second-largest city – on Wednesday, a day after the ISIL took control of the city and seized 31 Turkish truck drivers who were transporting fuel to a thermal power plant.