US to appoint ambassadors to Egypt, Iraq and Qatar 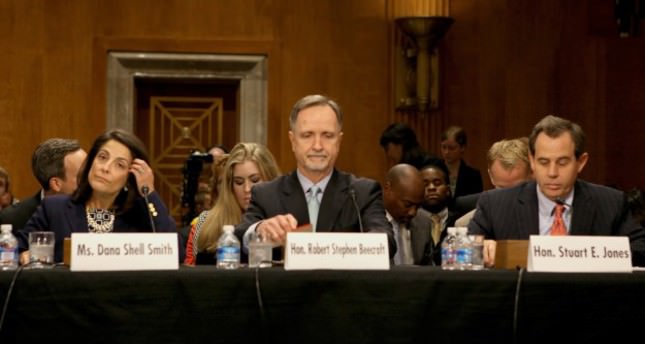 by AA Jun 12, 2014 12:00 am
The U.S.'s interests in the three vital Middle East hotspots were tested Wednesday during a Senate Foreign Relations Committee hearing.
The committee held a hearing on the nominations of Dana Smith for ambassador to Qatar; Stuart Jones to Iraq; and Robert Beecroft to Egypt.

In the hearing on Robert Beecroft's nomination to Egypt, the committee discussed the future of the newly-elected president Abdel Fattah al-Sisi's administration, and the role that the U.S. can play to consolidate democratic and economic stability.

Speaking at the opening of the panel, Robert Menendez, Chairman of the Senate Foreign Relations Committee Senator said that he is still concerned by "the state of media repression, intimidation and detention of activists, mass death sentences and the disproportionate use of force by Egypt's security forces."

Menendez said he expected the soon-to-be-appointed ambassador to take further steps in developing relations between the U.S. and Egypt beyond maintaining the peace treaty between Israel and Egypt.

"Al-Sisi's commitment to a partnership with the U.S. should go beyond holding control of Sinai, to protect human rights, develop the economy and build justice," said Menendez.

The hearing of Stuart Jones' nomination to Iraq centered around the country's security which is currently being rocked by militants of Islamic State of Iraq and Levant (ISIL).

"He has obviously not been a good prime minister. He has not done a good job of reaching out to the Sunni population, which has caused them to be more receptive to al-Qaeda efforts," said Corker.

Jones commented on the recent ISIL attack on Mosul saying that the U.S.encouraged Iraq to adopt a holistic strategy to isolate ISIL from the population and develop a strategy for sustainable security.

"This includes incorporating tribal fighters from Anbar, Ninewa, and Salahuddin into their security framework to protect the populations in their towns and villages. This strategy will require continued engagement between Iraq's political leaders and Sunni tribal leaders to effectively defeat ISIL," added Jones.

Smith, the nominee to Qatar, focused on U.S.'s concerns over the five released Guantanamo detainees in exchange for American Sergent Bowe Bergdahl. The release was brokered with mediation from Qatar between the U.S. and Afghanistan based terrorist group Taleban.

Smith said that one of her main priorities is to ensure that the released Taliban members are sufficiently restricted not to constitute a threat for the security of the U.S. homeland and American citizens abroad.

For the nominees to be formally appointed to their posts, they need to be approved by the commitee and receive no objections against their appointment from the U.S. Senate.

Jones, who was nominated by Obama to Iraq, served as Governorate Coordinator in the Al Anbar Province in Iraq, and in the National Security Council as Country Director for Iraq. From 1994 to 1996, he was special assistant to the U.S. Permanent Representative to the United Nations. He has also served in Turkey, El Salvador and Colombia.

Beecroft nominated to Egypt carried out an assignment in Washington, D.C. as Executive Assistant to two Secretaries of State, Colin Powell and Condoleezza Rice, and Special Assistant to a Deputy Secretary of State. He has served in the U.S. embassies in Amman, Riyadh, and Damascus. He served as Ambassador to the Hashemite Kingdom of Jordan from August 2008 until June 2011.

Smith, nominated for Qatar, served as a Foreign Service Officer since 1992, mostly throughout the Middle East.