Obama says he will not send US troops to Iraq 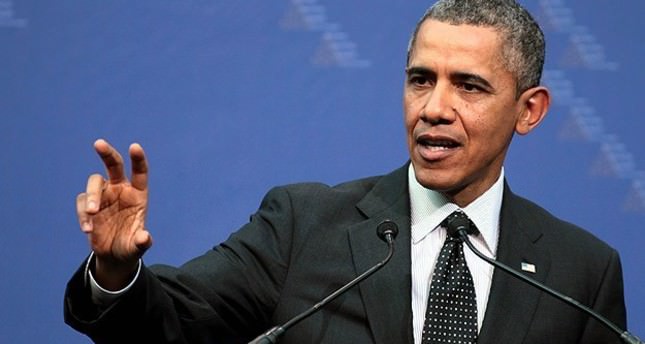 by AA Jun 13, 2014 12:00 am
U.S. President Barack Obama ruled out the use of U.S. troops in Iraq to combat the growing threat from the Islamic State of Iraq and the Levant, or ISIL, but said that he would evaluate other options as he called on the Iraqi government to mend sectarian divides.

"We will not be sending U.S. troops back into combat in Iraq, but I have asked my national security team to prepare a range of other options that could help support Iraq's security forces," Obama told reporters Friday on the South Lawn of the White House. "And I'll be reviewing those options in the days ahead."

Still, any action that the U.S. takes will have to be matched by 'hard decisions' from Iraq's leadership to bridge sectarian divides and promote stability throughout the country, said Obama.

"Iraq's leaders have to demonstrate a willingness to make hard decisions and compromises on behalf of the Iraqi people in order to bring the country together," he said.

Obama added that the desertion of Iraqi security forces from their stations, which allowed ISIL to rapidly expand its reach in the country, was a result of Iraq's political woes.

"The fact that they are not willing to stand and fight and defend their posts against admittedly hardened terrorists, but not terrorists who are overwhelming in numbers indicates that there's a problem with morale, there's a problem in terms of commitment, and ultimately that's rooted in the political problems that have plagued the country for a very long time."

ISIL, which has developed into a formidable force inside Syria, has extended its reach in Iraq since Tuesday, gaining near-complete control of the northern Iraqi city of Tikrit - Saddam Hussein's birthplace - and capturing Mosul, Iraq's second-largest city.

The group seized large swaths of western Iraq's Anbar Province in late December, including much of Fallujah and parts of Ramadi, flashpoints of the 2003 US-led war in the country.

Recent reports place their forces within 70 kilometers of the capital.

Obama warned that ISIL's advances could ignite fierce sectarian fighting "that could be very hard to stamp out" if the group tries to take over sites sacred to Shia Muslims. Karbala, which is just over 100 kilometers southwest of Baghdad, is one of Shia Islam's holiest cities.

American troops withdrew from the country in 2011.