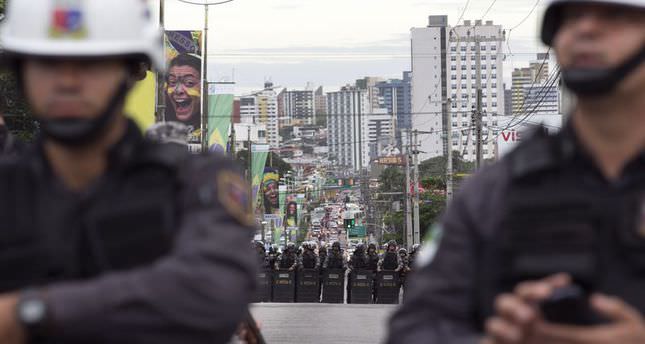 by Jun 17, 2014 12:00 am
Brazilian police arrested 14 people on Monday during an anti-World Cup demonstration near the stadium where Nigeria and Iran played in southern Brazil, local security authorities said.

A group of protesters destroyed windows of banks and stores after an anti-World Cup march of about 200 people was dispersed by police near the Arena da Baixada in Curitiba, a spokeswoman for the state's security command center told Reuters.

In another demonstration in the northern city of Natal, protesters burned a U.S. flag a few hours before the United States' first World Cup match against Ghana. The small demonstration that was headed for the Estadio das Dunas where both teams are playing was dispersed by the police without any clashes, local media reported.

Protests by Brazilians angry about wasteful spending for the World Cup has lost momentum since the start of the month-long tournament on June 12. Last year at a warm up tournament hundreds of thousands of Brazilians took to the streets to protest against corruption, poor public services and World Cup overspending.