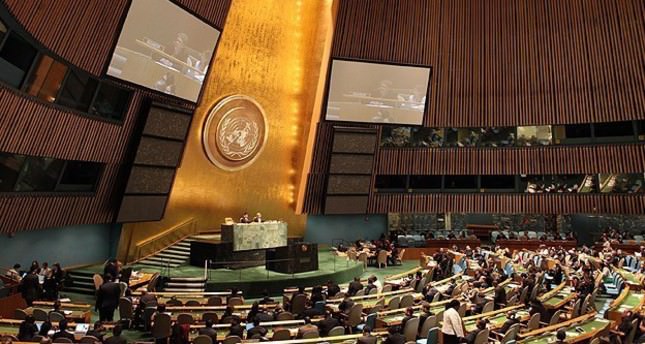 by Jun 17, 2014 12:00 am
Russia said on Monday that more than 100,000 people have fled across its border to escape violence in eastern Ukraine and signaled that it has been delivering humanitarian assistance to the region without Kiev's consent.

"There are people who come across the border, get Russian humanitarian assistance and bring it back to their families," he said after U.N. aid chief Valerie Amos briefed the Security Council behind closed doors on Ukraine at the request of Russia.

He said Russia attempted to work with Ukrainian authorities in delivering aid but they rejected the proposal "so we found ways and means in order to deliver humanitarian assistance to people in need."

When asked if the same measures could be replicated by the United Nations and other countries to deliver humanitarian assistance in Syria, Churkin said: "We are surprised that more is not done by people who conceivably could do it, but they keep asking questions instead of going ahead and doing it."

The United Nations says it can only deliver aid into Syria without government approval under a Chapter 7 resolution, which would be legally binding and enforceable with military action or other coercive measures such as sanctions.

For the past two weeks veto-wielding council members - the United States, Britain, France, China and Russia - have been holding discussions on a draft text to allow cross-border aid deliveries in Syria without government consent. The resolution has been drafted by Australia, Luxembourg and Jordan.

But Russia has said it is opposed to the delivery of aid in Syria without the consent of Damascus and that it is against a Chapter 7 resolution. Russia, supported by China, has previously vetoed four resolutions threatening any action against its ally, Syrian President Bashar al-Assad.

"It's tough. It's moving forward, but very slowly," French U.N. Ambassador Gerard Araud said on Monday about the negotiations.

The Security Council achieved rare unity in unanimously approving a resolution in February that demanded rapid, safe and unhindered aid access in Syria, where a three-year civil war has killed more than 150,000 people.

But that resolution - which was binding but not enforceable - has failed to make a difference, U.N. officials said.

Russia has put forward its own draft resolution on Ukraine that calls for an end to violence, implementation of a road map to peace and greater humanitarian aid access.

Western council members say they will consider Russia's draft resolution but do not believe there is a humanitarian crisis that requires Security Council action.

Ukraine and its Western allies accuse Moscow of fueling a pro-Russian uprising that threatens to break up the former Soviet republic of 46 million people. Russia denies orchestrating the unrest and says Ukraine's attempts to end it by military force are making the situation worse.