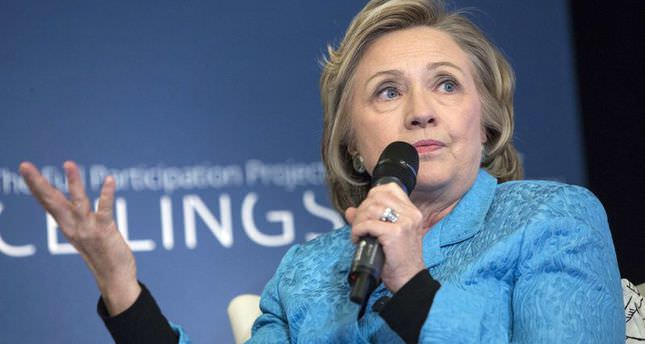 by Jun 18, 2014 12:00 am
Potential Democratic presidential candidate Hillary Clinton pointed out her differences with President Barack Obama on Tuesday over his decision not to arm moderate Syrian rebels, as neighboring Iraq struggles to cope with extremist spillover from Syria.

"We pushed very hard. But as I say in my book, I believe that Harry Truman was right, the buck stops with the president," Clinton said in a CNN interview.

The former secretary of state said she, along with the then heads of the Pentagon and CIA tried but failed to persuade Obama to arm the rebels fighting Syrian President Bashar al-Assad, but that the White House resisted.

Clinton said it was not clear whether arming moderates in Syria would have prevented the rise of the al Qaeda splinter group, the Islamic State of Iraq and the Sham, which has swept toward Baghdad aiming to build a Muslim caliphate across the Iraqi-Syrian border.

"It's very difficult, in retrospect, to say that would have prevented this," she said. She said it is too soon to tell whether American policy in Syria was a failure.

The former secretary of state, senator and first lady has been offering views that differ from Obama's on foreign policy in recent months, including on issues such as Iran's nuclear program and dealings with Russian President Vladimir Putin.

In an interview with Fox News on Tuesday, Clinton also said German Chancellor Angela Merkel had every right to be upset with disclosures that the National Security Agency had listened in on her cellphone as part of its large-scale surveillance of electronic communications in Germany.

"It was absolutely uncalled for," Clinton said.

"There is work that we need to do with the Germans and inside Germany," she said, recalling that some of the hijackers in the Sept. 11 attacks got part of their training in Hamburg.

But Clinton added: "That has nothing has to do with Angela Merkel's cellphone, and that should be off limits."

Clinton, who ran for the Democratic presidential nomination in 2008, has said she will not decide before November's congressional elections whether to run for president in 2016, but is regarded by many as the Democratic front-runner. Her CNN interview was organized as part of a tour to promote her newly released book, "Hard Choices."

Fox News also asked Clinton about accusations that the Internal Revenue Service targeted the tax status of organizations with names linked to the conservative Tea Party movement and if she agreed with Obama's characterization that it was a "phony scandal."

"I think that any time the IRS is involved for many people it's a real scandal," she said. "And I think, though, that there are some challenges that rightly need to be made to what is being said and I assume that the inquiry will continue.

"I don't have the details but I think what President Obama means is there was not a lot of evidence that this was deliberate but that's why the investigation needs to continue."