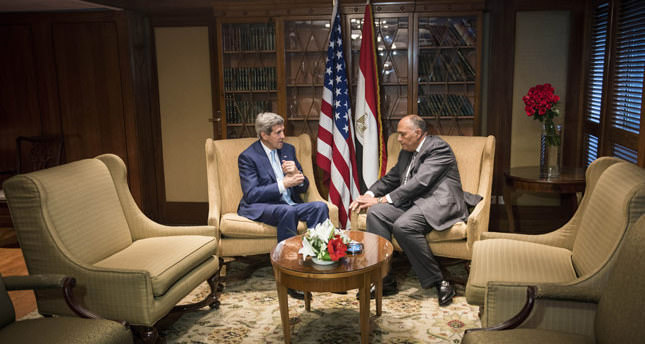 by AA Jun 22, 2014 12:00 am
U.S. Secretary of State John Kerry on Sunday warned against the dangers the militant movement of the self pro-claimed Islamic State of Iraq and al-Sham (ISIS) poses, not only to Iraq, where it is battling government troops in a number of provinces, but also to the whole Middle East region.

Speaking in a press conference in the Egyptian capital Cairo along with his Egyptian counterpart, Sameh Shoukri, Kerry said ISIS represents what he described as an ideology of violence and suppression. He said this poses dangers, not only to Iraq, but also to the whole Middle East region.

He said the U.S. cannot tolerate the presence of an entity that makes a safe haven of territories in Iraq and then launches attacks against other areas from there.

Kerry arrived in Cairo earlier on Sunday on a brief visit to the country for the first time since new President Abdel-Fattah al-Sisi took over earlier this month.

U.S. and Egyptian diplomatic sources said his talks with the Egyptian President dwelt, among other things, on the situation in the Middle East region.

To the shock of governments and peoples both inside the Middle East and outside it, ISIS, a group of militants who say they are bent on founding an Islamic state in Iraq and Syria, have captured massive territories in the northern Iraqi provinces of Nineveh and Saladin.

The movement has been controlling similarly massive chunks of the western province of Anbar since December last year, but it seeks to control areas on the border between Iraq and Syria, where it also fights for control.

Kerry said his country would not send any troops to Iraq, but it will try to assist the Iraqi people, if it wants so, to choose a unified government that can stand against ISIS.

The U.S. pulled out of Iraq at the end of 2011, but it decided to send military experts to Baghdad recently to advise the government on means of countering the advance of ISIS.

Relations between the U.S. and Egypt soured soon after last year's ouster by the military of elected president Mohamed Morsi. The U.S. administration held back a portion of its annual aid to Egypt as well as the delivery of some arms. The U.S. offers Egypt $1.5 billion in annual aid.

On Sunday, however, Kerry described his country's relations with Egypt as "historical". He said he came to Cairo in order to underline the strength of U.S.-Egyptian relations and also consult with Egyptian officials on developments in both Iraq and Libya.

He said his country would be committed to helping the Egyptian people succeed and also contributing to this success.

Kerry added that he discussed a series of issues with al-Sisi, including a recent death sentence against 183 backers of ousted president Mohamed Morsi, including the supreme guide of the Muslim Brotherhood, Mohamed Badie.

Badie and the other 182 people were sentenced to death by a criminal court in the central province of Minya on Saturday on charges of involvement in violence, attacking police stations and murdering a policeman.

Kerry said he thinks it is more suitable for him to leave the Egyptian president comment on this verdict himself at the time he sees fit.

He added that al-Sisi gave him the impression that he is committed to reassessing human rights legislation in Egypt as well as the judicial process in the country.
Last Update: Jun 22, 2014 8:22 pm
RELATED TOPICS