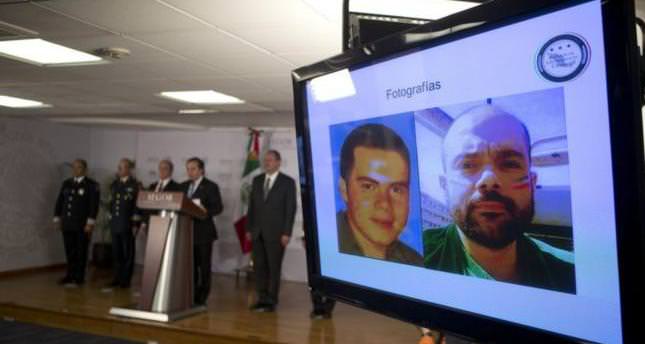 Federal police chief Monte Alejandro Rubido said Fernando Sanchez Arellano was detained in the border city of Tijuana on Monday and was expected to be brought to Mexico City sometime Tuesday.

Sanchez Arellano had $100,000 in cash when he was arrested, Rubido said at a news briefing at which he didn't take questions.

Journalists were shown photographs of Sanchez Arellano in a green soccer jersey and with his cheeks painted with green, white and red, the colors of the Mexican flag.

Sanchez Arellano inherited leadership of the Arellano Felix cartel from his uncle, Javier Arellano Felix, who was arrested by the U.S. Coast Guard in international waters off Mexico's Baja California in 2006. The uncle later was sentenced in San Diego to 40 years in federal prison.

Within two years, a renegade lieutenant, Teodoro Garcia Simental, made a power play and set off a bloodbath that turned Tijuana into one of Mexico's most violent cities, plagued by daytime shootouts, beheadings and mutilated corpses hanging from freeway bridges.

Sanchez Arellano, known as "The Engineer," was badly weakened after his rival was arrested in January 2010, which created an opening for the Sinaloa cartel to quietly gain control of Tijuana's underworld and its coveted smuggling corridor to San Diego. The Sinaloa cartel has made its mark in the area with cross-border drug tunnels, large-scale smuggling of methamphetamine at San Diego border crossings and marijuana-laden boats that motor up the Pacific coast to California.

In May 2013, the U.S. Drug Enforcement Administration included Sanchez Arellano on a poster of the six most influential drug traffickers in that region but U.S. authorities were more concerned about rising Sinaloa cartel lieutenants. Gary Hill, an assistant DEA special agent in charge in San Diego, said in an interview at the time that Sanchez Arellano was "almost like a ghost."

"As we see it, the Sinaloa cartel has the upper hand," Hill said.