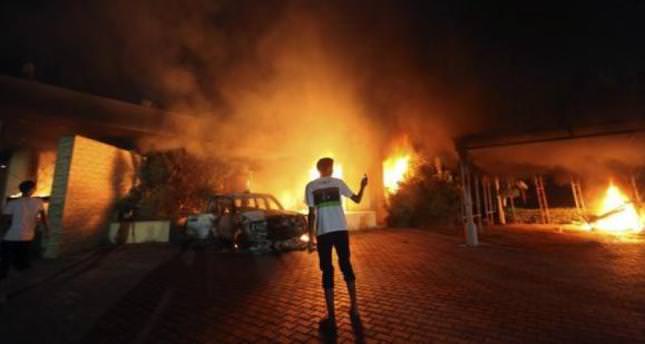 by Jun 29, 2014 12:00 am
A Libyan militia leader pleaded not guilty in a U.S. federal court on Saturday to a terrorism charge in the 2012 attack on the U.S. diplomatic compound in Benghazi that killed four Americans.

Ahmed Abu Khatallah was transferred to the U.S. District Court in Washington on Saturday morning from a Navy warship where he had been held since his June 15 capture by U.S. special operations forces in Libya.

He was charged at an afternoon hearing with conspiracy to provide material support to terrorists resulting in death in the attack that killed U.S. Ambassador Christopher Stevens and three other Americans in Benghazi.

The Sept. 11, 2012, attack triggered a political firestorm for President Barack Obama, with Republicans accusing his administration of misrepresenting the circumstances and of lax protection for diplomats.

The charge against Khatallah includes malicious damage to and destruction of U.S. property by fires and explosives. It carries a maximum penalty of life in prison, the Justice Department said. The department said it intended to file additional charges shortly.

Khatallah was not shackled when he appeared before Magistrate Judge John Facciola and kept his hands behind him as he gave answers through an interpreter. He wore a dark hoodie and black trousers and had long gray hair and a gray beard.

"You conspired, that is to say, you agreed with other people, to provide material support and resources to terrorists, including yourself, knowing that support and those resources would be used in killing a person in the course of an attack on a federal facility involving the use of firearms and dangerous weapons," Facciola told the defendant.

The judge appointed a public defender and Khatallah was taken out of the courthouse in a motorcade after the 10-minute hearing. U.S. officials did not say where he would be held.

Federal charges filed against him in July 2013 but kept under court seal until this month also included killing a person on U.S. property and a firearms violation.

There was heightened security around the federal courthouse building, which is blocks from the U.S. Capitol and across the street from the National Gallery of Art, prime tourist destinations in Washington. Two or three armed U.S. marshals patrolled the perimeter of the building.

Khatallah was taken aboard the USS New York, an amphibious transport ship, after his seizure in a raid on the outskirts of Benghazi. At the time of Khatallah's capture, a U.S. official said he was expected to be questioned by an interrogation team at sea. The unit seeks information from suspects that might prevent future attacks.

Khatallah was in U.S. military custody for nearly two weeks before being transferred into the American civilian court system. He was transferred to U.S. soil by helicopter, a U.S. official said.

"Now that Ahmed Abu Khatallah has arrived in the United States, he will face the full weight of our justice system," said U.S. Attorney General Eric Holder in a statement. "We will prove, beyond a reasonable doubt, the defendant's alleged role in the attack that killed four brave Americans in Benghazi."

Khatallah denied in a Reuters interview in October 2012 that he was a leader of Ansar al-Sharia, an Islamist group Washington accuses of carrying out the assault on the consulate.

His capture was a victory for Obama, who has been accused by Republicans of playing down the role of al Qaeda in the Benghazi attacks for political reasons and of being slow to deliver on promises of justice.

Republicans said then-Secretary of State Hillary Clinton failed to take steps to ensure the safety of American diplomatic personnel, an issue that is still resonating as Clinton considers running for U.S. president in 2016.

Khatallah's capture also led to Republican criticism, with some lawmakers calling for him to be taken to the U.S. prison at Guantanamo Bay, Cuba, for military prosecution. Obama has sought to close down the Guantanamo prison and his policy has been to try terrorism suspects caught abroad in the U.S. justice system.

Most terrorism suspects tried in the United States since the Sept. 11, 2001, attacks have been prosecuted at federal courts in New York and Alexandria, Virginia.

FBI Director James Comey said capturing Khatallah and bringing him to the United States was a big step forward in the Benghazi investigation, but the FBI's work was not over. "This case remains one of our top priorities and we will continue to pursue all others who participated in this brazen attack on our citizens and our country," Comey said.