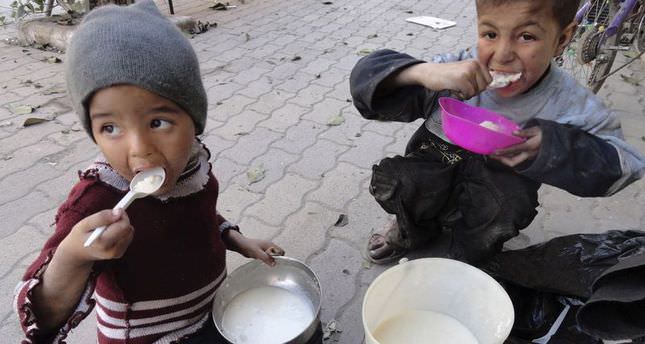 by AA Jul 01, 2014 12:00 am
Despite the June 21st agreement for a truce between the Syrian government, armed groups and Palestinian fractions inside Yarmouk camp, the UN Relief Agency is still unable to deliver humanitarian aid.

Chris Gunness, spokesperson for the United Nations Relief and Works Agency (UNRWA), says that it is now a month since they last distributed aid inside the camp, in a latest news release issued on Sunday.

"UNRWA is urgently seeking the resumption and expansion of its humanitarian activities inside the camp, where conditions remain dire for the 18,000 civilians trapped there," Gunness said.

The agency demands that all parties cease hostilities and seek to resolve their differences exclusively by peaceful means, and urges all concerned parties to immediately allow and facilitate the resumption of food distribution to civilians inside Yarmouk.

Located on the outskirts of Damascus, eight kilometers from the city center, the camp accommodated more than 160,000 Palestinian refugees before the Syrian civil war started in March 2011.

While Syrian government forces are in control of the periphery of the camp, they also hold Yarmouk under siege from July 2013, trapping the refugees and Syrians inside.

The UNRWA stands ready to move forward with "rapid humanitarian response so that the immediate and longer-term needs can be met," Gunness said.

The UN said the agency will advocate for "continuous, substantial and safe humanitarian access to Yarmouk," in order to secure both the protection of Palestinian and Syrian civilians.

Human rights groups claim that more than 100 people have starved to death in Yarmouk, and the large parts of the suburb "lie in utter ruins," the BBC reported on 22 June. Other western media have also reported of the continued clashes and shelling of the Yarmouk camp and surrounding suburbs.

The once flourishing Palestinian community of Yarmouk, which was established after the 1948 Arab-Israeli war, now extends to two square kilometers and has become a symbol of large scale suffering.

"There were no UNRWA operations inside Yarmouk today 27th June," the agency reported Monday on its website.