US against an independent Kurdistan in Iraq 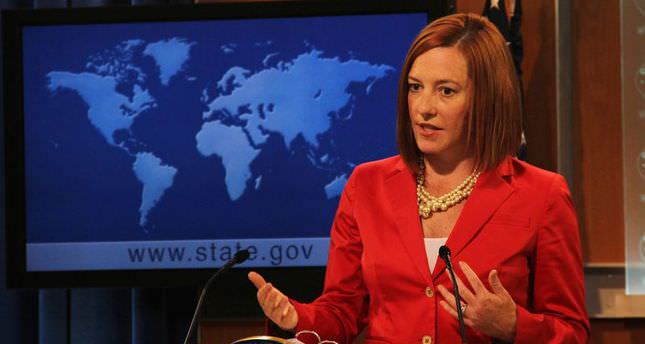 by AA Jul 01, 2014 12:00 am
U.S. State Department spokeswoman, Jen Psaki said Monday that the U.S. is not supportive of an independent Kurdistan in Iraq and called for all countries to support efforts for unity.

As Iraq has been in the grip of terror stormed by militants of Islamic State of Iraq and Levant (ISIL) on several key cities since early June, the partition of Iraq and the idea of an independent Kurdistan in northern Iraq has been voiced more loudly.

"At this challenging and grave security, we think it's even more important that all parties - the Shia, the Sunni and the Kurds - remain united against the threat they face," Psaki said on the possibility of an independent Kurdistan.

As key US ally, Israel's Prime Minister Benjamin Netanyahu, on Sunday, called for an independent Kurdish state in northern Iraq, while another ally, Turkey's Deputy PM Bulent Arinc said that Turkey would never support a disintegrated Iraq, in respect to PM Netanyahu's statement regarding the establishment of a Kurdish State.

Concerning ISIL's declaration of restoring caliphacy, Psaki said that this declaration has no meaning to the people in Iraq and Syria but acts only to further expose the true nature of the organization and its desire to control people by fear.

"It emphasizes even more that this is a critical moment for the international community, for countries in the region, for all of the Iraqi people to unite against the threats that they face," said Psaki.

ISIL has gained a significant ground in Iraq and Syria since early June. From the borders of Jordan to the outskirts of Baghdad, ISIL militants have been influential.

During KRG President Masoud Barzani's meeting with U.S. Secretary of State John Kerry, Barzani said that there is a new conjecture and a new Iraq which is being assesed as his will to declare independence.