At least one dead in World Cup city’s overpass collapse 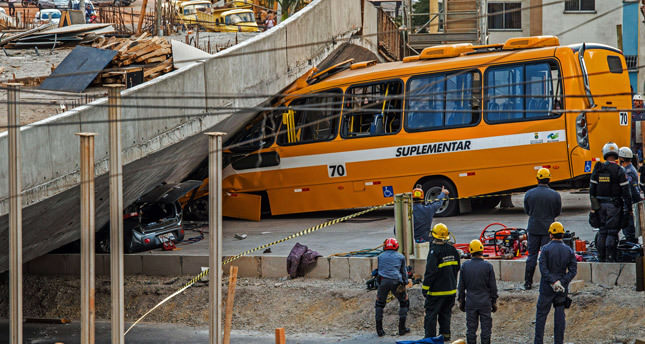 by AA Jul 04, 2014 12:00 am
An overpass under construction in Brazilian World Cup host city Belo Horizonte collapsed on a busy highway Thursday, killing at least one person and injuring 13 others, the local fire department confirmed to the Anadolu Agency.

The local health secretary, however, said two people had died and 22 people injured in the collapse.

The overpass, which was under construction for the city's new rapid bus transit system, fell on top of at least four vehicles - a bus, two trucks and a car - at around 3:10 p.m. local time.

Captain Frederico Pascoal, from the Minas Gerais statefire department, told the AA that one fatality was confirmed as the driver of the bus, which was reportedly full of passengers.

The official said the number of deaths was likely to rise as emergency crews reached the car, which was entirely trapped under one of the collapsed sections of the overpass. Emergency services are preparing to cut the concrete structure into smaller sections to gain access to the vehicle.

Pascoal also confirmed that the two trucks crushed under the overpass belong to the company responsible for its construction, and that no one was believed to be in the two vehicles at the time of the incident, or on the overpass itself, according to representatives from the company.

Those injured in the incident have been transferred to local hospitals, and their condition is not thought to be life-threatening.

Local news reported that 19 emergency teams were taking part in the rescue at the site, which is around 4 kilometers from the city's World Cup venue, the Mineirao stadium.

An investigation will follow to identify why the overpass collapsed, but local media reported that support struts had been removed ahead of the project's completion, originally scheduled for July.

The major Avenida Dom Pedro I highway, onto which the overpass collapsed, is one of the key routes from the city's main airport to the stadium and the nearby Pampulha district of Belo Horizonte.

Belo Horizonte is one of 12 World Cup host cities and is set to host the tournament's first semifinal next Tuesday, July 8.