US welcomes release of Turkish hostages held by ISIS 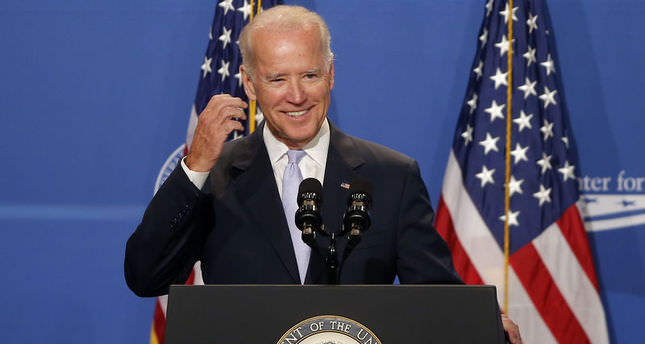 by AA Jul 04, 2014 12:00 am
United States Vice President Joe Biden welcomed the release on Thursday of 32 Turkish drivers who had been held hostage by militants in Iraq.
Islamic State of Iraq and the Levant-led militants released the Turkish truck drivers, who were abducted when the ISIL took control of Iraq's second-largest city Mosul on June 10.

Biden, calling Turkish Prime Minister Recep Tayyip Erdoğan on Thursday, discussed the situation in Iraq and expressed his pleasure at the release of the drivers, according to a statement released by the White House.

"The Vice President and Prime Minister agreed on the importance of supporting lasting security and stability in Iraq and the cooperation of all Iraq's communities," said the statement.

There are still 49 consulate staff members in captivity, including the Consul-General, who were abducted a day after the truck drivers.

The drivers, who had been held for 23 days, were released in the Iraqi Kurdish city of Erbil and flew back to southern Turkish province of Şanlıurfa.
Biden also attended a meeting between U.S. Deputy National Security Advisor Tony Blinken and a delegation of officials from northern Iraq's Kurdish Regional Government.

According to the White House press office statement, the American and Kurdish sides agreed on the importance of forming a new inclusive government in Iraq to effectively counter the threat posed by ISIL.

The delegation led by Kurdish President Massoud Barzani's Chief of Staff Fuad Hussein held several meetings with U.S. officials concerning the crisis that has unfolded in Iraq since mid-June, and discussed the future status of the Kurdish region, either as an independent state or autonomous government.