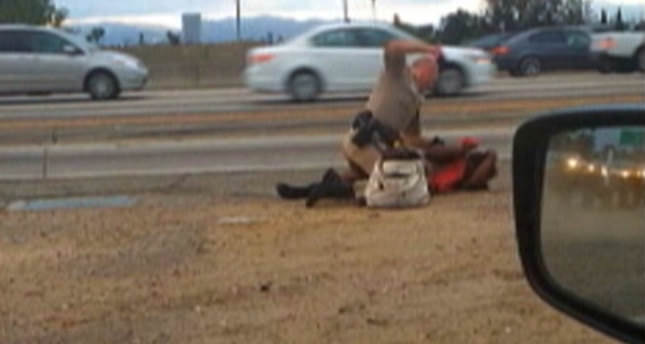 by Associated Press Jul 06, 2014 12:00 am
The California Highway Patrol has vowed to carry out a thorough investigation after a video emerged of one of its officers repeatedly punching a woman he had pinned down on the side of a Los Angeles freeway.

The woman had been walking on Interstate 10 west of downtown Los Angeles, endangering herself and people in traffic, and the officer was trying to restrain her, CHP Assistant Chief Chris O'Quinn said at a news conference. O'Quinn said the woman had begun walking off the freeway but returned when the confrontation occurred.

The video shows the woman struggling and trying to sit up while the officer punches her in the face and head until an off-duty law enforcement officer appears and helps him handcuff her.

Passing Driver David Diaz recorded the Tuesday incident and provided it to media outlets including The Associated Press. He told the AP in a phone interview Friday that he arrived as the woman was walking off the freeway. He said she turned around only after the officer shouted something to her.

"He agitated the situation more than helped it," said Diaz, who started filming soon after.

Los Angeles attorney Caree Harper said the woman's family wants authorities held accountable for "beating a great-grandmother in broad daylight." She declined to disclose the woman's name or answer questions about what the woman was doing along the edge of one of the city's busiest freeways.

"We want the focus to be what he was doing to her, not what she was doing" prior to the confrontation, said Harper, who said she is representing the family. "She was getting beat like an animal. No one should ever be beat like that."

The officer is on administrative leave while the patrol investigates. He has not been identified.

The video caught the attention of local civil rights leaders, who expressed shock and outrage at their own news conference.

"Speaking for the women of this community, we are angry, we are upset," said Lita Herron of the Youth Advocacy Coalition.

O'Quinn said the CHP would answer community concerns, and that an investigative team already has been assembled and has begun its work.

"We are known as an agency that really polices itself," O'Quinn said.

"Over the years, CHP has had a very good track record in terms of community relations," Hutchinson said. "That's why this was so shocking."

O'Quinn said the incident report listed no injuries for the woman, who would not give her name. She is undergoing psychiatric evaluation, he said.

O'Quinn said he could not say what prompted the officer to act as he did. But he noted California Highway Patrol officers have a heightened sense of the dangers of being on the freeway compared with a citizen "who is not accustomed to the speed and conditions," especially outside of a car.

"The most dangerous thing that we face is traffic," O'Quinn said.