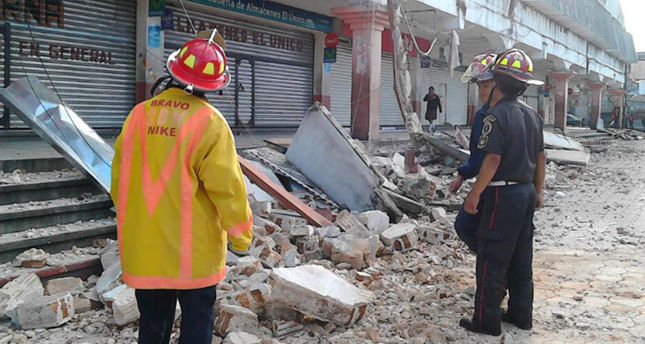 by Jul 07, 2014 12:00 am
A strong 6.9 magnitude earthquake rocked parts of southern Mexico and Guatemala on Monday, killing one person and injuring another as shockwaves toppled walls and caused landslides.

The US Geological Survey -- which revised down the magnitude from 7.1 -- said the quake struck the Pacific coast of Mexico's Chiapas state at about 1124 GMT at a depth of 60 kilometers (37 miles).

The epicenter was located just two kilometers from the Mexican town of Puerto Madero, and 200 kilometers from Guatemala City.
No tsunami warnings were issued for the area.

In Mexico, one man was reported dead in the town of Huixtla after a wall fell on him, the Chiapas state civil protection department said on Twitter. Buildings and highways were cracked, and mountain roads collapsed, authorities said.

At the airport in Tapachula, ceilings caved in but flights were still operating. Authorities were assessing damage in other areas of Chiapas, one of Mexico's poorest states.

In Guatemala, one person was injured when a wall collapsed on him at his home in the city of San Marcos, about 300 kilometers west of Guatemala City, a fire department spokesman told local radio. Some roads were blocked by landslides triggered by the quake.

Two deaths were reported on social networks in Guatemala, but a spokesman for the country's disaster response agency said they had not been confirmed.

"We're currently making the rounds to determine if there are people dead or injured and to evaluate the damage. But for the moment, we have no confirmed deaths," said the spokesman, David de Leon.

Guatemala's State Institute of Seismology recommended that classes be suspended because of expected aftershocks.

Tremors could be felt some 670 miles away in parts of Mexico City where "for the moment there is no damage or injuries," Mayor Miguel Angel Mancera said. The quake was also felt in El Salvador, where no injuries or damage were reported.

Mexico is prone to seismic activity, with earthquakes occurring most often along the Pacific coast. This was the 33rd seismic event in Chiapas this month, according to the civil protection department.

Western Guatemala was rocked by a 7.4-magnitude earthquake in November 2012. Forty-four people were killed.