Protestors and police clash before the final in Brazil 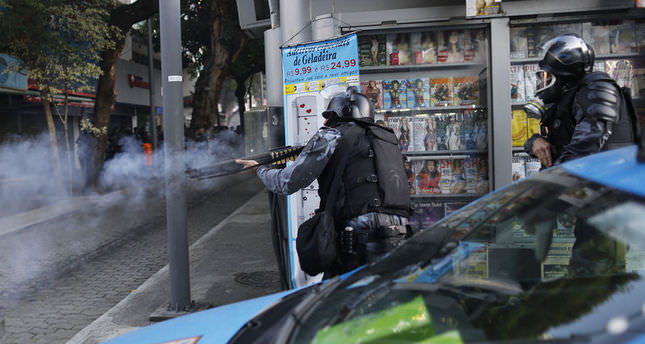 by AA Jul 14, 2014 12:00 am
Anti-World Cup protesters clashed violently with riot police at a rally near the Maracanã stadium in the Brazilian city of Rio de Janeiro on Sunday as the tournament final between Germany and Argentina was about to kick off.

As well as voicing anger over World Cup spending by the government, protesters also demanded an end to what they see as police repression and denounced the preemptive arrests of 37 protesters ahead of the rally.

The rally was held just under a mile (1.2km) from the stadium, and a mixture of military, riot and mounted police forces heavily outnumbered the 300 protesters present, some of whom identified themselves as from the anarchic "Black Bloc" movement.

"We don't need a World Cup, we need better living standards, a decent government," Eron Morais de Melo, a 33-year-old dentist from Rio, told the Anadolu Agency (AA), dressed as a superhero Batman. "Some 250,000 people will have been evicted from their homes. This World Cup has been a disgrace both on and off the pitch."

"The way they go around arresting protesters is just wrong. Our government is also overpaid and inefficient. That's why we're protesting. We don't have a problem with the World Cup per se, but the amount of money invested is absurd," Ronaldo Vasil, a 19-year-old student, said.

Protesters taunted police with accusations of lethal force used against residents of the city's many slum areas, known as favelas, and labeled security forces "fascist" and "dictator-like."

Although the act started peacefully, protesters had chosen a sensitive location and many vowed to march on the Maracanã, in a replay of events of last year's Confederations Cup final.

At one point protesters set off smoke bombs next to police lines, to which security forces responded with a hail of stun grenades, tear gas, pepper spray and rubber bullets.

At least two people were injured by grenade shards, including a photographer. Many protesters could be seen struggling from the effects of pepper spray and tear gas. As the protest regrouped on its initial square, mounted police charged crowds with long batons.

Anadolu correspondents at the scene witnessed at least two detentions, as well as seeing one policeman lunge at a protester to rip off his mask.

Despite the bravado, there was never any chance for the protesters to get near the stadium. Rio's security detail of over 25,000 police, troops and other personnel during the World Cup final was the biggest in the country's history, with 11,000 allocated in and around the stadium.

As well as 79,000 fans inside the stadium, the game was also attended by heads of state including German Chancellor Angela Merkel and Russian President Vladimir Putin. Brazilian President Dilma Rousseff was also present to award the World Cup trophy to 2014 World Cup winners Germany. Germany beat Argentina with a single goal from Mario Gotze in the second half of the extra time.