24 arrested in NY for protesting against Israel including prof. Finkelstein 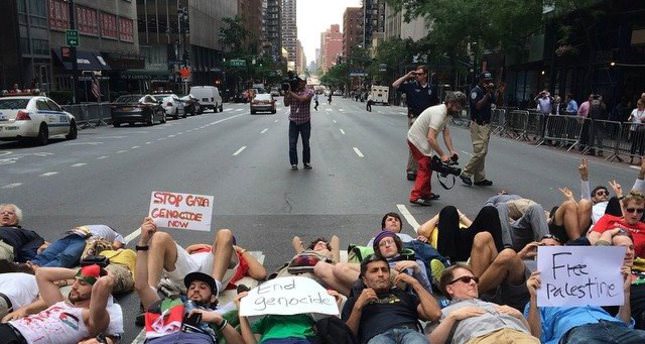 by Daily Sabah Jul 30, 2014 12:00 am
24 people, including prominent scholar Norman Finkelstein in Midtown were arrested on Tuesday while protesting the ongoing Israeli attacks on Gaza.

The event was organized by professor Normal Finkelstein, who called on 100 people to commit to civil disobedience and protest Israel's attacks in front of the Israeli mission at the United Nations in New York City. He emphasized that individual actions alone would not be effective and stated that taking action collectively was necessary to raise awareness.

The crowd consisting of 100 people gathered and chanted for about 20 minutes, followed by a walk towards 43rd street where around 40 people lay down across the crosswalk. The demonstration was interceded by police who stated that the protestors should leave if they did not want to be arrested.

Among the arrested are war veterans from Vietnam, Palestinian Christians, and people from different backgrounds who want the ongoing Israeli offensive to come to an end.

Over 1300 Palestinians have been killed by Israel in the past 23 days, including many children and women.