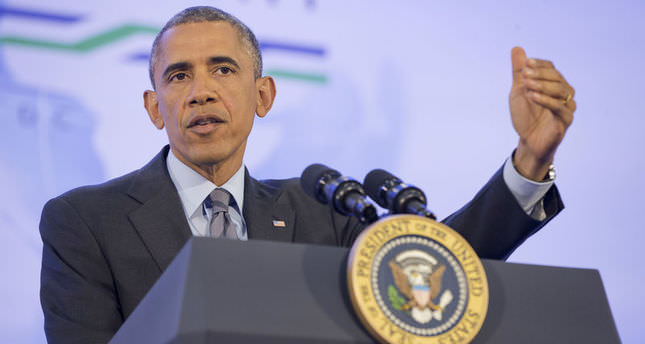 by AA Aug 07, 2014 12:00 am
There has to be recognition that Gaza cannot survive being permanently closed off from the world, U.S. President Barack Obama said Wednesday.

During a press conference wrapping up a three day summit of 50 African leaders in Washington, Obama said the short term goal of a ceasefire between Israel and Hamas is to ensure that the rocket-launching into Israel would not resume and Gaza city would be reconstructed.

"For the long term, there has to be recognition that Gaza cannot sustain itself permanently closed off from the world, incapable of providing some opportunity for jobs and economic growth for the population who live there," said Obama. "We have to see the shift in opportunities for the people of Gaza."

Reiterating that Israel has the right to defend itself against rocket attacks from Hamas, Obama also added that he had great sympathy for the Palestinians living in Gaza.

Obama accused Hamas of acting irresponsibily during the conflict in which Israeli forces killed more than 1,800 people and around 10,000 wounded, according to Gaza's Health Ministry.

He also commended the Egyptian government and Palestinian President Mahmoud Abbas for their efforts to broker a ceasefire.

Obama said that Abbas acted responsibly for he recognized Israel.

On the other hand, he noted that the Palestinian Authority has also been weakened as a result of the ongoing conflict and the people may have lost confidence or hope of how to move forward.