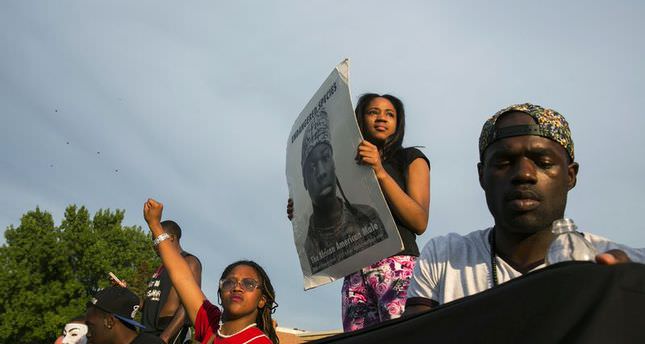 by Aug 15, 2014 12:00 am
Police named Darren Wilson as the officer who shot and killed an unarmed black teenager in Ferguson, Missouri, and said the youth was the key suspect in a robbery that occurred minutes before the shooting, which sparked days of sometimes violent protests.

Wilson was the officer who shot and killed 18-year-old Michael Brown last Saturday, police said, giving in to pressure to identify the six-year veteran officer with a clean record, and to provide details about the investigation in order to ease tensions in the largely black suburb outside St. Louis.

Days of protests had cast a spotlight on racial tensions in greater St. Louis, where civil rights groups have complained in the past of racial profiling by police, of the arrests of a disproportionate number of blacks and of discriminatory police hiring practices.

At a news conference Friday, police released incident reports, video stills of the robbery and provided a more detailed timeline of the Aug. 9 events. The reports, based on video surveillance and witness interviews, said the events unfolded shortly before noon, with a report of a robbery at a Ferguson convenience store.

Two men, Brown and 22-year-old Dorian Johnson, entered the store and Brown became involved in a "struggle or confrontation" with someone else at the store, apparently over a box of cigars, a police report said.

One page of the report named Brown as the "primary suspect in this incident," describing him as being dressed in khaki shorts, a white t-shirt and sporting a red baseball hat. It identified Dorian Johnson, the friend who was with Brown when he was shot, as a second suspect.

That page of the incident report appeared to be written by a police officer whose name was redacted from the publicly released version. The officer appears to suggest he or she was able to observe Brown's body – found in khaki shorts and a white t-shirt - after he was shot by Wilson.

"I responded to that scene and observed Brown," the officer's report said. "After viewing Brown and reviewing this video, I was able to confirm that Brown is the primary suspect in this incident."

Ferguson Police Chief Tom Jackson said at a news conference Friday that Wilson came upon Brown at about 12:01 p.m., walking down the street not far from the convenience store, and Wilson had shot the teenager by 12:04 p.m.

Jackson did not discuss details of the actual shooting.

The police version that has thus far been provided of Brown's shooting differs markedly from witness accounts.

Police said Brown reached into the police car and struggled with the officer, who shot and killed him. Wilson sustained a facial injury, which was treated in a hospital, they said.

Witnesses have said Brown was trying to get away from the officer, who tried to grab him after telling him to move off the street and onto a sidewalk. Brown held up his hands in a sign of surrender but was shot several times, they said.

Some residents expressed outrage that police suggested Brown was a robbery suspect when he was killed.

"For them to say this is an armed robbery makes me think this is a cover up," said Ferguson resident Milton Jackson, 37.

"I don't believe what the officer did was called for. Even if there was a robbery, it was unnecessary force to shoot an unarmed black man," he said.

Arthur Austin, 39, another resident, said: "This is how the police operate here, they always defame the name of the victim. Michael Brown had never been in trouble so it doesn't add up. The more I hear, the less I trust what the police are saying."

Police had held back naming Wilson for nearly a week because of fears he could be harmed amid a volatile and sometimes-violent week of angry protests that followed Brown's death.

The move to identify the officer comes after the American Civil Liberties Union sued St. Louis County and the county police Thursday, seeking copies of initial police reports of the shooting.

Civil rights leaders from around the country, community activists and protesters also demanded that the officer be identified and be held accountable for the killing.

Thousands of protesters, demanding justice for Brown's killing, had clashed with riot gear-clad local police since Saturday, but there was a marked shift Thursday to a calmer tone after the governor put an African-American Missouri Highway Patrol Captain in charge of security for the area.

On Thursday night, a small number of police mingled with the crowd, urging a healing to the racially charged situation, in marked contrast to the riot gear, rubber bullets and tear gas that had confronted protesters earlier in the week.

Just three of Ferguson's 53-strong police force are black, while two-thirds of the town's population of 21,000 are black.

Missouri Highway Patrol Captain Ron Johnson, who was named Thursday to oversee security in the area, reported Friday that the near week-long period of unrest and angry confrontations between police and protesters appeared to be over.

Under his direction, roadblocks were lifted, and instead of using teargas and intimidation, Johnson's teams walked the streets to talk with protesters and listen to their concerns.

"Last night was a great night," he said. "People were talking... getting their voice out.