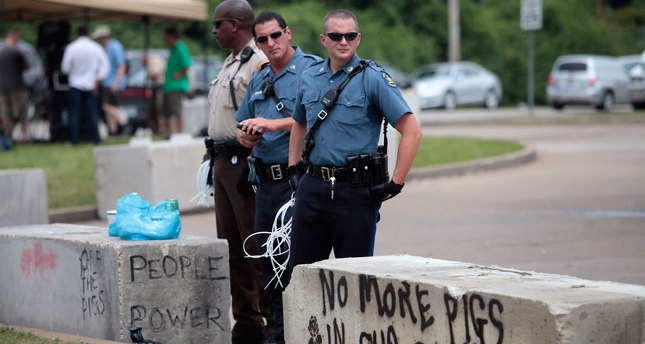 The U.S. National Guard has been deployed in the U.S. state of Missouri to help bring stability and order. HRW call on the Ferguson police to stop interfering with the freedom of press

Following clashes between police and protesters that flared up Sunday night, the second day after a curfew began, the National Guard was sent to the predominantly black city of Ferguson, Missouri, a suburb of St. Louis, to assist the local police achieve peace and order. "Given these deliberate, coordinated and intensifying violent attacks on lives and property in Ferguson, I am directing the highly capable men and women of the Missouri National Guard to assist Colonel Ron Replogle and the Unified Command in restoring peace and order to this community," Missouri Governor Jay Nixon said on Monday in a statement on his official website after signing an order to quell the tension in the town of Ferguson.

The deployment of the National Guard came after Sunday's curfew was ignored by many protestors who continued to march down the city's main streets in protests. As tensions between the demonstrators and police quickly escalated Sunday night, preliminary cautions taken by the local police were not enough to ease the violent clashes that erupted on Aug. 9 after the police shooting of an unarmed black teenager, Michael Brown, provoked anger and frustration in the community. The Ferguson police, who were equipped with military grade riot gear and tactical vehicles, reportedly fired tear gas at protestors who remained in the street early on Sunday.

The Ferguson police reported that after the police warning of clearing the streets, the number of protesters remaining was about 150 people on Sunday morning. SWAT forces detained at least seven people, and a man was wounded during clashes at the Ferguson town center on Saturday night, when the tension flared up again leading to another round of unrest.

On Sunday, the private autopsy report of Michael Brown revealed that he was shot at least six times by police officer Darren Wilson. As The New York Times reported on Sunday, the unarmed teen was shot two times in the head and four times in the right arm. According to Dr. Michael M. Baden, the former chief medical examiner for the City of New York, one of the bullets that entered the top of Brown's skull led to the fatal injury, as Anadolu Agency (AA) reported.

As the violent clashes between heavily armed Ferguson police and protesters have continued unabated, U.S. President Barack Obama said in an Aug. 14 statement, "There is never an excuse for violence against police, or for those who would use this tragedy as a cover for vandalism or looting. There's also no excuse for police to use excessive force against peaceful protests, or to throw protestors in jail for lawfully exercising their First Amendment rights," while calling for restraint by all sides.

As the lasting turmoil has led to many media outlets and civil society organizations questioning heavily armed police forces, Human Rights Watch (HRW) has called on the Ferguson police to "stop using intimidation tactics against peaceful protesters and journalists," stating that the police actions have interfered with the freedom of the press protected under the International Covenant on Civil and Political Rights, ratified by the U.S. in 1992.

The case of the killing of Michael Brown, an unarmed 18-year-old, by the police has led to intensified demonstrations against the police, as many angry citizens took to the streets to protest the most recent police shooting. The largely peaceful demonstrations against the Ferguson police department's excessive use of force have turned the Missouri town into a battle zone.
Last Update: Aug 19, 2014 12:16 pm
RELATED TOPICS