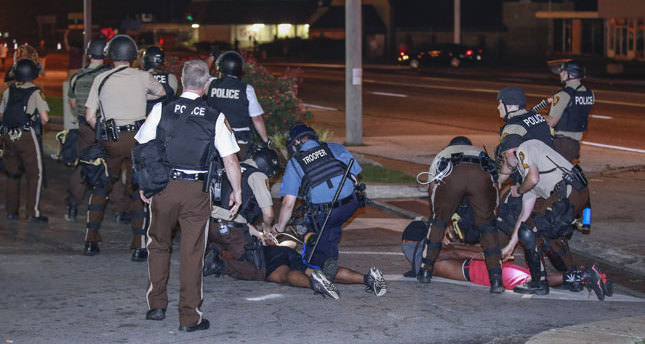 Amid escalating turmoil in Ferguson, police arrested a journalist and removed reporters from the site of violent clashes between protestors and police, signaling a violation of the freedom of the press

As the turmoil in Ferguson, Missouri escalated, the local police have denied the access of journalists to the area where the latest confrontations have occurred, by ordering them to stay behind a police-designated tape. Freedom to report the news in Ferguson has been violated since the largely peaceful demonstrations, sparked by the fatal police shooting of an unarmed teenager, turned the streets into a battle zone.

Ever since the civil unrest has begun in Ferguson, the arrests and tear-gassing of journalists during the demonstrations drew attention to U.S police abridging the freedom of the press. Police in Ferguson arrested a veteran Getty photographer, Scott Olson. Many journalists have been kept away by the police or barred from entering the city after the violent clashes erupted. Wesley Lowery, a Washington Post political reporter, and Ryan Reilly, a Huffington Post reporter were arrested by Ferguson police on Wednesday. After long hours of detention, they were released the same night. Other journalists were hit and teargased by the Ferguson police outfitted in SWAT gear, while covering the unrest. A camera crew from Al-Jazeera America said they were shot at by rubber bullets while they were recording the protests.

Speaking from the White House, the U.S. President Barack Obama said that "Our constitutional rights to speak freely…and to report in the press must be vigilantly safeguarded especially in moments like these," while calling for protestors in Ferguson to remain peaceful and for police to show restraint. "The vast majority of people are peaceful protestors [but] a small minority of individuals are not… Looting, carrying guns and even attacking police only serves to raise tensions and chaos. It undermines, rather than advances, justice," President Obama said in a statement on Aug. 18.

During the ongoing clashes, police have reportedly resorted to using teargas and stun grenades against protesters, according to reports.
Yet, the local police came under "heavy gunfire" by smaller groups on Monday night and 31 people were arrested due to spams of violence toward police, local authorities told Reuters news agency. "Not a single bullet was fired by officers despite coming under heavy attack," State Highway Patrol Captain Ron Johnson told a news conference.

As the streets of Ferguson descended into violent chaos, the militarized National Guard was sent to Ferguson to assist local police in order to restore peace and order by de-escalating the situation. The National Guard arrived in Ferguson on Monday night but have not been directly involved in heavy clashes, keeping its distance from the streets where the rioting occurred. The deployment of the National Guard came after Sunday's curfew was ignored by many protestors, who continued to march down the city's main streets to join the protests. As tensions between the demonstrators and police quickly escalated on Sunday night, the preliminary cautions taken by the local police were not able to ease the violent clashes that erupted on Aug. 9 after the police shooting of an black teenager, Michael Brown, that provoked anger and frustrations in the St. Louis community.

The last time the heavily armed National Guard forces were deployed was in 1992. The violent clashes had erupted in Los Angeles, California, in protesting a black man severely beaten by four white police officers. Although the National Guard forces were called in to regain control and quell the situation, more than 50 people were reportedly killed during the heavy clashes between police and protestors.
Last Update: Aug 20, 2014 9:32 am
RELATED TOPICS