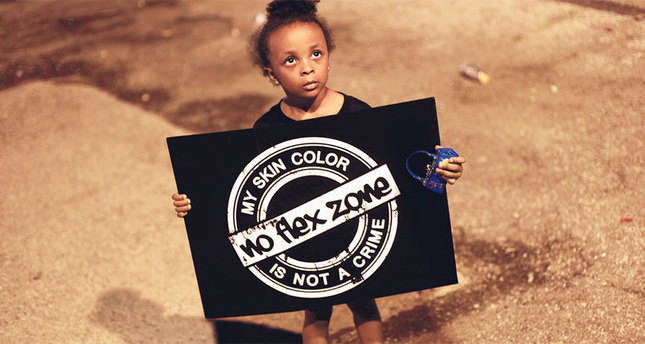 For the last 12 days, the predominantly black St. Louis suburb of Ferguson, Missouri has been the site of racially charged civil unrest that came after Michael Brown, an unarmed black teenager, was shot to death by a white police officer. Another unarmed black man named Kajieme Powell was also shot by a white police officer a total of 12 times and killed. These two police shootings point to the issue of racial injustice in America. It has also exposed the reality of an American society sharply divided over race. It is possible that if Michael Brown had been white, he might still be alive today. Therefore, many black Americans' lives are under risk of being shot by a police officer at any time, as the video recording of Powell's shooting by police shows.

For the majority of black people, the latest demonstrations and clashes between the police and protestors are related to the issue of race, as a recent survey conducted by the Pew Research Center indicates. According to the survey, there is a wide racial difference between blacks and whites over the police shooting of Michael Brown. The vast majority of black Americans – 80 percent – believe that police brutality is related to race and that the police are more likely to profile them as gang members and criminals, even if they are neither, and see them as a security threat. Another finding is that 65 percent of black Americans say the police have gone too far in responding to the protests concerning the shooting. However, whites are divided with only 33 percent of respondents saying the police have gone too far and 32 percent defending the police's excessive use of force against protestors, while 35 percent of whites offered no comment.

The shooting and killing of blacks by white Americans has a long history. Americans have long witnessed the killings of black people and the injustice. The case of Trayvon Martin, another unarmed18-years-old black American from Sanford, Florida, who was killed last year by George Zimmerman, caused protests after a Florida jury found Zimmerman not guilty in the shooting death of Martin even though he was accused of being motivated by racism in the shooting. The case of Martin led to growing anger and nation-wide action. Protests over Zimmerman's acquittal were held in more than 100 cities with many people calling for justice.

U.S. President Barack Obama also addressed the death of the unarmed black teenager saying, "Trayvon Martin could have been me 35 years ago," in a press conference at the White House. "And when you think about why, in the African-American community at least, there's a lot of pain around what happened here, I think it's important to recognize that the African-American community is looking at this issue through a set of experiences and a history that doesn't go away," President Obama said, while adding that the U.S. was "still not a post-racial society."

Martin Luther King Jr. and Malcolm X, both prominent black figures in American history, fought against racial discrimination in order to abolish racial bias in society. Malcolm X was a black American Muslim civil right activist and an advocate for the rights of blacks who courageously resisted white racism. Martin Luther King Jr., one of the greatest and most influential African Americans in history and a civil rights leader, fought against discrimination to eliminate racial oppression in American society. Black Americans have long been considered a threat by police departments in the U.S. The situation in violence-hit Ferguson reflects that race warfare is a main point in understanding why black people in American society have been shot by white police officers. Socio-economic status is inextricably linked to race, being white or black. Therefore, there is a widespread misperception by many white Americans that there is a correlation between skin color and social status. The U.S. census bureau reports that there are 50 million Americans living below the poverty line: Poverty is often equated with criminality by police in black communities. This shows why those who are both black and poor are most likely exposed to police brutality.