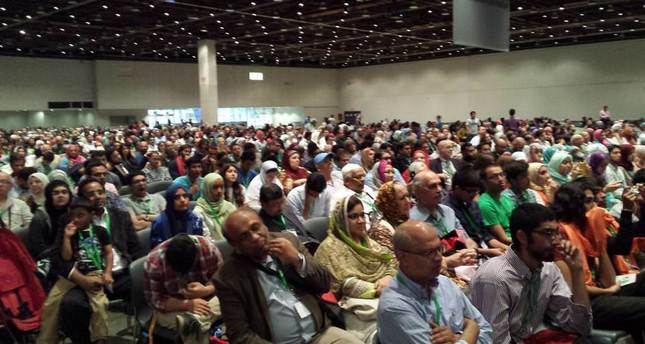 by Ragıp Soylu Sep 02, 2014 12:00 am
Thousands of Muslim Americans rushed to the 51st Islamic Society of North America (ISNA) conference in Detroit last weekend as two panels were dedicated to Turkey's political and civil society experience.

ISNA is the largest Muslim organization in North America and is promoting a community debate on a wide range of issues from segregation and sexism within the Muslim society to the Syrian civil war. The conference has focused on Turkey for the last several years while the country was experiencing GDP growth and undertaking major reforms to strengthen its regional role, in turn becoming a "power house." Here in the U.S., Turkey is receiving lots of attention from American Muslims and many of them see Turkey as a model country that can inspire other Muslim majority countries with its success. One session was entitled "Turkey at the crossroads" and featured at the four-day conference notable names including Ufuk Ulutaş from Turkish daily newspaper Akşam, who discussed the recent political developments in Turkey.

Although he did not talk explicitly about the well-known Gülen Movement, the audience was well aware of the fierce clash between the AK Party government and the movement. Gülenists have been under the spotlight of the international community of late due to their alleged ties to last year's Dec. 17 operation, an attempt at overthrowing the government with a supposed "corruption probe."Turkey's National Security Council declared the movement, led by Fethullah Gülen who is based in rural Pennsylvania, as a national security threat to the state, partly because of its wideranging infiltration within the top state apparatus, including the judiciary and security bureaucracy.

After the AK Party won the local elections in March with minimal contestation providing Recep Tayyip Erdoğan with a victory at the first ever direct presidential elections last month, the Gülen Movement was pushed into a tight corner. ISNA's Muslim Americans described this struggle with Turkey as a "domestic fight" and asked the speakers to encourage parties to stop it. One Indian-American gentleman from the participants said that he had visited Turkey several times and was impressed by its rapid rise adding that, "you must finish this fight in your country. We are all brothers."He mentioned his visits to Fatih University and Şifa Hospital, which are well-known Gülenist institutions, and begged for the continuation of this success. Several citizens conveyed the same messages and emphasized that the fight could jeopardize the prosperity of Turkey.

One member of ISNA said that Gülenists, for their part, were following the conference with considerably more people compared to last year. He said that Gülenists were trying to gain ground within the Muslim American community as financial and social support from their home country is dropping sharply. Gülenist media outlet Today's Zaman published an open letter addressing ISNA to cancel the panel on Turkey, worrying it was going to depict Gülenists as menaces.

Turkish members of ISNA pointed out the fact that Gülenists didn't give any attention to the organization in previous years and declined every invitation which didn't feature at least one Gülenist as a speaker within the conference.

Gülenists are also having hard times in the U.S. because of a controversial visit to Jerusalem organized by Duke University Islamic Chaplain Abdullah Antepli, breaking the academic boycott against Israel in the U.S. Antepli, in collaboration with Israel- based Zionists Shalom Hartman Institute, established a forum called Muslim Leadership Initiative (MLI) to "empower an elite group of emerging, religious and intellectual leaders to influence the North American Muslim community in reassessing its preconceived notions of Judaism and Israel," according to the official website of the initiative. Several Muslim-American commentators described the visit as "an Interfaith Trojan horse" and accused Antepli of faith washing apartheid and "whitewashing Israeli occupation in Palestine."