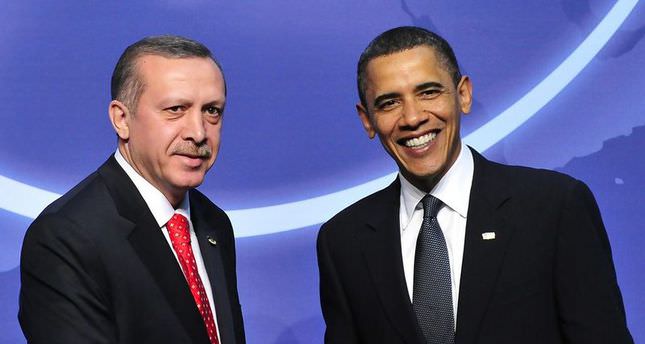 by Ragıp Soylu Sep 04, 2014 12:00 am
Israeli lobby is pushing hard on a new resolution accusing President Tayyip Erdoğan of endangering Jewish community in Turkey to weaken Turkish-American bilateral relations. House Resolution 707, which was introduced to House of Representatives before recess and co-sponsored by Democrat Jerrold Nadler and Republican Peter Roskam, is specifically targeting Erdoğan for his comments comparing Israeli crimes in Gaza with barbarism of Hitler.

The resolution, which is backed by main Israeli lobby groups including AIPAC, ADL and AJC, stated," Turkish Prime Minister Recep Tayyip Erdogan's continued anti-Israel incitement, including stating that Israel's defense against Hamas rocket fire is ''barbarism that surpasses Hitler,' sparks unwarranted anger towards Jews and endangers the Turkish Jewish community and Jews around the world."

A congressional aide, speaking to Washington Free Beacon, claimed that people are happy to see members taking a stand against Erdoğan and exposed the resolution's real aim which is to target Turkish American relationship. "Erdoğan's controversial statements and support of terrorist organizations like Hamas" should call into question bilateral relations between the two countries." the senior aide said.

This statement is clearly exposing the sharp differences with the Congress and the President, Barack Obama. The president last month praised Erdoğan's victory speech and noted that as Turkey's first directly elected President, Erdoğan has an historic opportunity to further move Turkey forward, the White House said.

Yet it didn't stop Israeli lobby groups to ramp up support for the resolution. AJC called its followers and members to stand up for the initiative." Urge your Representative to support a resolution introduced by Representatives Roskam and Nadler condemning increasing incidents and expressions of global anti-Semitism and specifically citing Turkish Prime Minister Recep Tayyip Erdoğan for incitement against Jews and the Jewish state." The action alert reads.

The initiative received strong criticism from Turkish diplomats based in Washington, D.C. A diplomat, speaking under the condition of anonymity, said that Israel was trying to cover up the strong international reaction against its actions under the name of anti-semitism. " It is true that Israel's Gaza action feeds anti-semitism too. Turkish President Erdoğan's stance on Israel wasn't discriminative or offensive .

He reiterated his position against anti-semitism many times in the last month. " Diplomats said that the timing of the resolution was unfortunate as well. "The text was prepared before the presidential elections. So Erdoğan's inclusive statements about Jewish people living in Turkey did take place during his infamous balcony speech. He said that people regardless of their ethnic and religious identities, including Jews are the genuine citizens of Turkey."

Erdoğan last month said that all the citizens of his country are the children of one nation. "We are the people of Turkey before being Muslim, Christian, Jewish, Yazidi ... Alawite, Sunni ... before being Kurdish, Arab, Laz, Georgian, Bosnian, Circassian, Armenian or Greek," he said in Ankara during his victory speech.

Diplomats said that the number of representatives supporting the resolution will be clear next week after the break, and they will set a strategy to remove the passage on Erdoğan.