Former US Pres. extends his support for peace at ISNA Convention 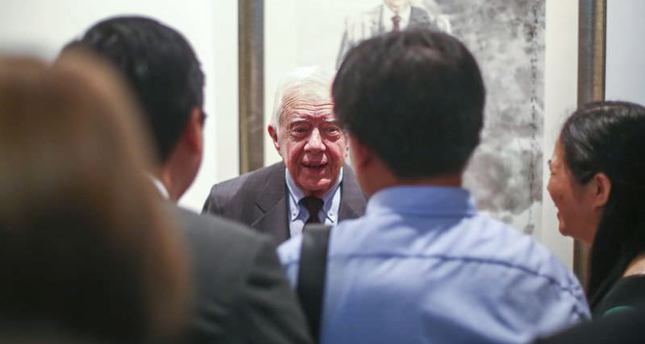 by Daily Sabah Sep 12, 2014 12:00 am
Former US President Jimmy Carter was guest speaker at the 51st Annual ISNA Convention held between August 29 and September 1 at the Cobo Center in Detroit Michigan.

The convention held annually is an important gathering aiming to bring people of different backgrounds and faiths together in order to appreciate the differences they have and create alliances and networks with each other.

This year's theme 'GenerationRise: Elevationg Muslim American Culture' was chosen in order to celebrate the increase in the number of Muslim scholars, artists, thinkers, activists and community members and aiming to take all the pursuits of this community to the next level in all fields from education to arts.

Former US President Carter (1977-1981) addressed the crowd touching upon many topics including the Middle East and discrimination against women in all societies.

In his speech to a full-house in Cobo Center, Carter said "You can't bring peace to the Middle East without justice and human rights for the Palestinians."

Mentioning that he prayed and dreamt for peace between the Muslims and Jews in the Middle East, "When my prayers are answered and we have peace in that Holy Land then the Israelis and all their neighbors will be blessed to live in peace and prosperity," said special guest former President Carter.

Carter designated a major part of his speech to preventing discrimination against women and girls and giving them equal rights in society. He encouraged people of all backgrounds to join the movement to end the predicament against all women and girls as he said, " My hope is all Christians, all Muslims, all people of other faiths, even those who don't have one, will join in this crusade to end the plight of our wives, our sisters, our daughters."

Carter backed his speech by referencing from the Qur'an as he said "If you were taught by your parents or you believe you're superior to your wife just because you are a man, Allah says you're wrong."

Many renowned guests delivered notable speeches at the 51st Annual ISNA Convention including Neturei Karta Movement, known for its anti- Zionist views, convert Keith Ellison, first Muslim ever elected to the House of Representatives and member of the Democratic-Farmer-Labor Party and Professor Ingrid Mattson who was described as "Perhaps the most noticed figure among American-Muslim women" in an article in the 2010 New York Times.

Besides larged-scaled conferences the ISNA Convention held workshops in which Turkey was represented in two sessions offering "Turkey at a Crossroads" and "Influence of Turkish-American NGO's into the American Culture and Daily Life" topics, which was organized by Zakat Foundation of USA and United World Alliance. The panel speakers included, the Dean of Business and Economics of Kirikkale University, Professor Nasuh Uslu, Seta Foreign Affairs Director Dr. Ufuk Ulutas and Professor Osman Kandara from the Southern University Lon Angeles.

The speakers touched upon the change that took place in Turkey since 2001 and how people were discriminated for the religious beliefs before AK Party came to power. During question- answer time at the end of the session the attendees extended their appreciations on the improvements that took place with AK Party.